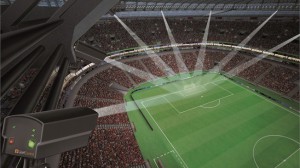 GoalControl’s system uses 14 cameras to track whether or not a goal is scored.

FIFA’s long awaited decision on which goal-line technology it would use for the World Cup (and upcoming Confederation Cup) has finally been made and in a surprise the federation chose Germany-based GoalControl’s camera-based, ball-tracking system, There were four contenders for the big and GoalControl was the last one to officially enter the race. And now? The company will quickly ramp up for the Confederations Cup that will be held in Brazil at the end of June.

The use of GoalControl-4D is subject to a final installation test at each stadium where the system will be installed, which is a standard procedure as part of the official certification process defined in the GLT Testing Manual. These tests will be conducted by an independent test institute. Prior to the start of every match, the match officials will also carry out their own tests, in-line with the operational procedures first implemented at the FIFA Club World Cup 2012 in Japan.

FIFA chose GoalControl-4D over three rival projects: GoalRef and Cairos, which both use magnetic sensor fields; and Hawk-Eye, another camera system which was considered the favorite. Hawk-Eye is already used in tennis and cricket, and its English parent company was bought by World Cup sponsor Sony Corp. before the system began FIFA-endorsed testing in 2011.

GoalControl was licensed by FIFA only one month ago, and owner Dirk Broichhausen told The Associated Press then that its simplicity was the key factor. GoalControl uses 14 high-speed cameras, seven trained on each goalmouth, and passed FIFA-approved tests in February in German stadiums in Duesseldorf and Gelsenkirchen. All four systems met FIFA’s demand that a signal is transmitted to the referee’s watch within one second if a goal should be awarded.

FIFA said the cost of installation, at six scheduled Confederations Cup stadiums and 12 for the World Cup, was considered. Costs are expected to be around 200,000 Euros to install and 3,000 Euros to operate per match.

While all four companies had previously met the stringent technical requirements of the FIFA Quality Programme, the final decision was based on criteria relating more specifically to the tournaments in Brazil, including the company’s ability to adapt to local conditions and the compatibility of each GLT system in relation to FIFA match operations. The respective bids were also judged on cost and project management factors such as staffing and time schedules for installation.

FIFA will now liaise with GoalControl GmbH to define the timeline for installation leading up to the FIFA Confederations Cup.

The tournament will mark the second time GLT has been used at a FIFA competition, after the successful implementation of the technology at last December’s FIFA Club World Cup. This followed the historic decision by the International Football Association Board (IFAB) to approve the principle of using GLT during a special meeting on 5 July 2012.

FIFA President Sepp Blatter was a longstanding opponent of high-tech help for referees, but urged using goal-line technology in Brazil after England midfielder Frank Lampard had a clear goal disallowed against Germany at the 2010 World Cup.

FIFA performed another U-turn last month when it withdrew previous opposition to publicizing goal-line rulings. Now, competition organizers can choose whether decisions are shown to fans on big screens in stadiums and television viewers. In tennis and cricket, anticipation of a decision provided by Hawk-Eye has become part of the in-game entertainment.

“It’s not secret,” Blatter said on the sidelines of the IFAB meeting in Edinburgh. “Once we have the technology and it shows it’s a goal or not a goal, we have to be transparent, otherwise there’s no need to do it.”

Referees still have the final say on awarding a goal, or even using goal-line technology when it is installed. Mandatory pre-game tests give match officials the option to switch off the technology if they doubt its accuracy on that day.

Hawk-Eye, GoalRef and Cairos will now seek to persuade other football clients, such as the English Premier League or German’s Bundesliga, to choose their systems before next season begins in August.