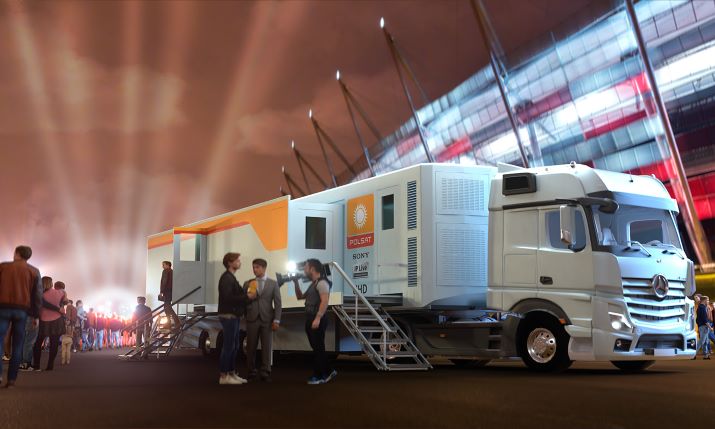 Poland-based Polsat, one of the largest media companies in Central Europe, has selected Sony Professional Solutions as the prime contractor for a 4K IP outside broadcast truck that will be delivered to the broadcaster later in the year.

Building on its long-term relationship with Sony, Polsat has consulted with the company as a business and technology partner for its new flagship truck. While Sony’s expertise and technologies were instrumental in developing the core design and infrastructure of the truck, this project was also carried out in collaboration with local ISIs 4Vision and Autokontener.

Sony’s Live Element Orchestrator and IP Live system manager have been selected for the entire management control and monitoring of the system, built around COTS IP switches from Cisco. The overall system responds to the latest SMPTE 2110 and AMWA NMOS suite of open standards, enabling interoperability with current and future systems that Polsat will build around this truck.

The Live Element Orchestrator and IP Live system manager have both been designed with IP native systems in mind. These provide all the foundations required to manage, control and monitor the entire OB truck production infrastructure and edge devices. On top of that comes the XVS-9000 mixer and HDC-3500 and HDC-P50 system cameras which integrate seamlessly into the core IP infrastructure.

For HDR and SDR production, the SR live for HDR workflow and operational practices will be adopted. Built around the XVS-9000 and HDC cameras toolsets, they will be complemented by the addition of HDR converters – HDRC-4000 and NXLK-IP50Y – adding more resources to the core processing capabilities of the truck.

This system provides Polsat with a powerful and flexible production capability for entertainment and sports events. The new OB vehicle also means that programmes can be produced in UHD/HD HDR format.

Andrzej Szymański, CTO at Polsat, commented: “We know that the future of the media and broadcasting industry will rely strongly on great technology to deliver great content to audiences. With this mind we set out to build a futureproof truck capable of servicing this need. Sony is our trusted partner in this because of their strong industry knowledge and capacity for innovation. But this project is also the fruit of collaboration with multiple implementation partners such as 4Vision and Autokontener and other technology vendors.

“It’s the first step in a longer term transformation of our infrastructures and workflows that will make our content production and supply chain more efficient, flexible as well as scalable and responsive.”

Hiroshi Kajita, head of media solutions, Sony Professional Solutions, said: “Sony is an company with a solid technology foundation; we’re excited when we’re able to work long term with a customer like Polsat and local partner like 4Vision, not only because of the strength of the relationship there, but also because of a common vision to bring always better technology and people to improve the end viewers’ experience.”