Today’s opening ceremony of the Ryder Cup in Gleneagles, Scotland, ends a long planning and set-up period for the event for host broadcaster European Tour Productions (ETP) and its production services provider CTV Outside Broadcasts. It also begins a weekend of challenges as, for example, the location of the ceremony near the Gleneagles Hotel required cable infrastructure to be flown on bridges over roadways. 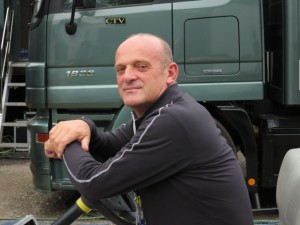 Hamish Greig, CTV OB, technical director, is leading the wave of innovation at the Ryder Cup in Scotland.

“The biggest challenge is cabling infrastructure and licensing of radio signals as we have 10 RF cameras while Sky has another four and NBC Sports another six,” explains Hamish Greig, CTV OB, technical director. The course is also located more than a mile from the compound and is divided into three distinct areas requiring separate fibre and RF support for each of those areas.

“The fibre route is 1.5 kilometers to the first tee and the sixth green is another 2.5 kilometers,” says Greig. “And the furthest fibre at the third tee reaches out another 1.5 kilometers from that.”

“We’re running at about 90 per cent capacity on the smaller hubs and 75 per cent on the main hub so we have spare for everyone,” adds Greig.

This marks the fifth time that ETP and CTV OB have been at the center of Ryder Cup host operations (the first was 1997 at the Valderrama Golf Club in Sotogrande, Spain. CTV OB is also providing fibre connectivity for Sky Sports, the OB1 unit for The Golf Channel, the OB7 unit for Turner Sports/PGA.com, highlights facilities for the BBC, and then on-course power kits and IFBs for BBC Radio and IMG Radio.

“Hosting is a lot easier because you control it a lot more and therefor are more part of the conversations to make sure you have the correct infrastructure,” explains Greig. “When we work unilaterally we are piggy backing and need to make things work accordingly. But it is a lot less frantic piggy backing.”

The last time CTV OB and ETP played host was four years ago at Celtic Manor in Wales, a Ryder Cup remembered as much for its rain and mud as for the ability of the European team to hold off a furious comeback from the United States team.

“Things have changed a lot since Celtic Manor,” says Greig. “Our RF life was a lot simpler then as we only had two RF sites: one at the compound and another at the 15th hole. But here we have six main RF sites, including a 45-metre crane on the sixth green, two 70-metre cranes at the third tee and 16th fairway, and then a 56-metre crane in the compound.”

Each of those sites are at the middle of the biggest technological leap for the host broadcaster at the Ryder Cup: the use of a proprietary CTV OB RF-over-fibre system. It debuted at The Open in July and is making a difference at the Ryder Cup by allowing 39 duplex RF high-power mics and 310 wireless radios to be used with greater reliability.

“Our communications are sent over fibre to the cranes and then converted to RF and sent out over the course,” explains Greig. “In the past we would need a large set of base stations.”

While the core of the productions take place in OB units in the compound (CTV OB for the host feed, Telegenic for Sky Sports, and NEP Visions for NBC Sports) it is the TOSSA (Technical Outside Source Signal Allocation) cabin that is at the centre of everything courtesy of a Pro-bel Cygnus router and related kit from Evertz, Imagine Communications, and Miranda. It is there that camera and audio signals from ETP, NBC Sports, and Sky Sports are all brought together before being sent out to the respective OB units. 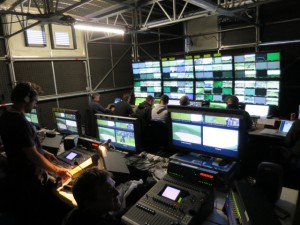 The “Iso Palace” in the Ryder Cup compound.

“We are taking 40-odd signals from NBC, 20 from Sky, and supplying about 160 signals between cameras, replay, and graphics and then feeding it out,” explains Greig. The total camera complement in use by CTV OB for the world feed includes 45 cabled HD cameras, 10 RF cameras (including an Interia Unlimited xMo super-slo motion camera) and 39 RF on course mics ( combination of effects and Oncourse ).

The world feed created by CTV OB and ETP is produced in two OB units: OB9 and OB10. A separate cabin, known as the “Iso Palace” is on the frontline as well with four EVS operators sitting with two separate directors who will line up replays for director Jim Storey. Four audio mixers, sitting behind the EVS operators, will ensure the proper audio follows the video. 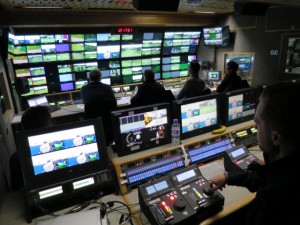 The font bench area of OB10 will be at the centre of the Ryder Cup world feed production.

Storey and the main production crew operate out of OB10 while OB9 is home to additional EVS replay operations handling super iso shots with 18 channels of EVS under the control of four operators, the sound effects mixing (18 stereo signals from each tee and green plus 12 mono RF mics). The Virtual Eye flyover graphics operations also originate out of OB9.

One feature viewers can expect to see more of at this edition of the Ryder Cup is the Protracer system that tracks the flight of the ball off of the tee. CTV OB will have six in use on holes 2, 4, 5, 6, 10 and 13 . The Golf Channel a Protracer camera with drops at tee boxes on holes 11, 14, 16, and 18

There will also be super slow-mo coverage from the first tee via i-Movix and a NAC camera that will be in use by Sky.

“I love this event because it can change at any time,” says Greig. “And I am continually surprised at the amount of people who have no interest in golf who are interested in the Ryder Cup.”

The interest of the world has officially begun with the opening ceremony.