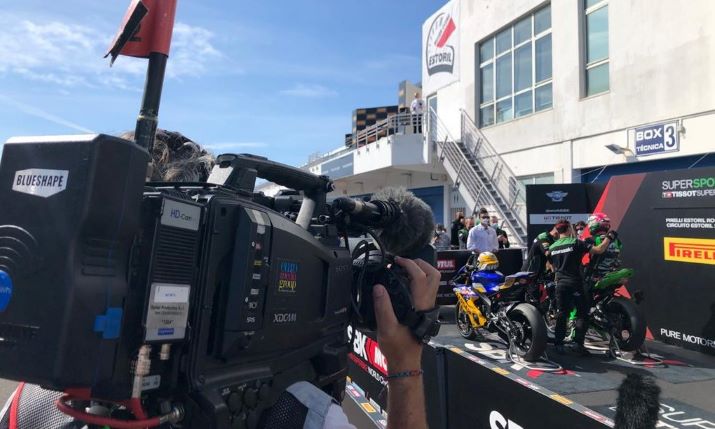 The 2020 Superbike World Championship went to Circuito Estoril in Portugal for the 2020 grand finale earlier this month (16-18 October), with Global Production providing the host broadcast coverage based around a complex RF set-up.

The television coverage for all the championship races was entrusted to Euro Media Group’s Turin-based Global Production, assisted by Netco Sports, 3Zero2TV and 3Zero2 Studios.

SVG Europe caught up with Moreno Roncon, producer and technical coordinator for Global Production, to talk about the production of the races leading up to the grand finale and the big weekend itself. 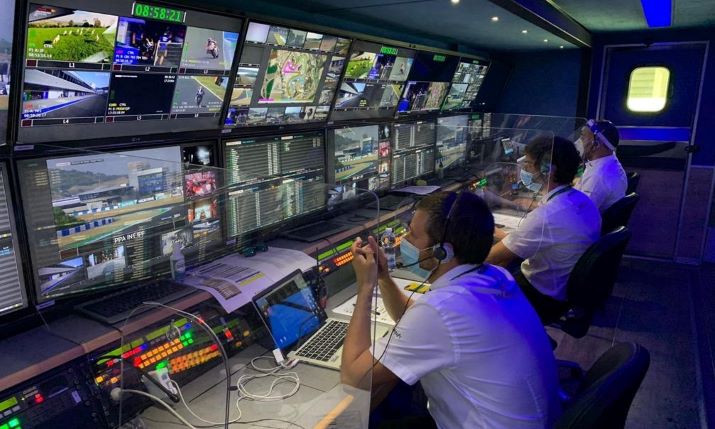 How is Superbike TV production characterised compared to MotoGP?

Dorna has repositioned the Superbike brand since it acquired the rights, with very precise traits to differentiate this championship from MotoGP.

These productions are consolidated, very demanding, comparable in many respects, but Superbike is carried out with far less resources.

The differences are quite marked in the television and editorial language, in the use of graphics which is decidedly more important in MotoGP.

Then the motorcycles are at the centre of the Superbike show which, derived from the production models, very close to those that the public can buy in a motor shop.

In MotoGP, on the other hand, the show is much more focussed on the pilot [driver], a true hero and inimitable protagonist, and the racing bikes are very different from standard ones; [they tend to be] prototype bikes.

What production facilities did you deploy in Estoril? Are there any particularly interesting features?

We have engaged on each circuit our top vehicle, OB6, as many as 22 TV cameras and three other radio cameras that can move around the paddocks and pit lane.

Two of the 22 cameras on the circuit can shoot 6x high-frame-rate images that allow us to create much more defined slow-motion clips.

Motorcycle manufacturers sometimes request these videos because they are very rich in precious information in some critical phases, such as braking, acceleration, and curves. This allows a study of any possible improvements to be applied to production bikes.

Dorna, which commits here [for Superbike] lower budgets and management costs than on MotoGP, decides the technical specifications and also suggests the production figures such as director, assistant director, RVM technician, and dedicated editor. Then all the ‘techniques’ of the television service are provided by us at Global.

In Estoril, Dorna required the use of 25 cameras and replays with Grass Valley K2 Dyno Replay System equipment, divided between four operators on board the truck and three more located in a container at the TV compound, for anti-COVID-19 protocols.

The choice is due to the presence of other Grass Valley equipment fibre connected and housed inside the TV compound, a MAM and a complete Grass Valley proprietary editing system. 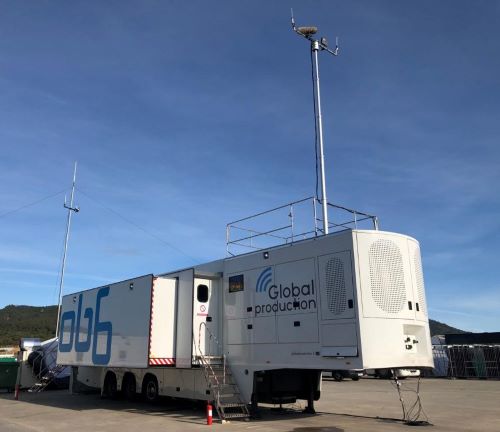 The radio frequency (RF) plant is certainly very complex, how many people does it engage and what problems arise?

Also in Estoril, we installed eight diversity antennas in four clusters, connected with a fibre optic ring, which receives the signals of the three motorcycles, each equipped with two onboard cameras and a flat antenna with omnidirectional irradiation, usually positioned on the motorbike tail.

To ensure proper coverage, we rely on a RF predictive engineering software that simulates the positioning of the antennas, takes into account the entire transmission and reception spectrum involved and, in the end, indicates the best positioning points.

Four professionals, three from Global and one from Dorna, are needed to ensure the engineering of the system that has to deal with the transmission and reception axis of the motorcycles that tilts at every curve and with the interference of the digital signals already present in area.

The on-board system of each of the three bikes includes a microphone and two proprietary Dorna micro cameras connected to a Vislink digital transmitter and receiver (CU) radio link, dedicated wiring, and power supply batteries.

The first of the two cameras is positioned on the front and the second at the rear, on the tail, or in a lower position near the swingarm and the rear wheel.

The Vislink CU transmits video, audio and telemetry data of the two cameras but also allows switching between the two video signals and also receives the switching signals. 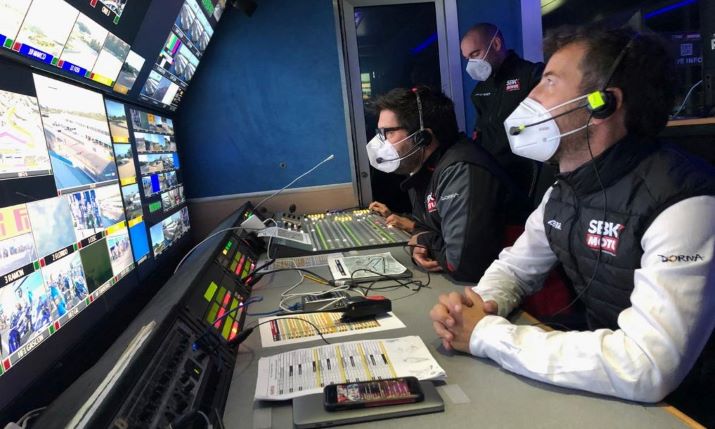 One of the containers at the TV compound is dedicated to the RF section and includes some flight cases with equipment used to manage the signals in reception and transmission, a monitor and a system with a custom made remote control panel.

From this, through a MIDI communication protocol, it is possible to manage the calibrations of all on-board RGB cameras, control black signals and iris.

Throughout the system, perfect frequency management and the use of band-pass filters are essential, which help ensure the cleanliness of signals.

Other complexities arise from the passage of cables on board the motorcycles which are very studied and also weights that must be balanced with the power supply batteries.

The digital telemetry data derived from the performance of the motorcycles and the control unit are transmitted by the camera units but are not exploited – by choice – in the graphics as is the case in MotoGP.

Have different health and safety measures been implemented to prevent the spread of COVID-19?

The 2020 Superbike World Championship, reduced due to the lack of ticketing, only cancelled four dates outside Europe and two in Italy; Misano and Imola. This was due to the absence of the public, forced by the COVID-19 pandemic.

However, by adopting 100% the anti-COVID protocol ratified by Global since March, Dorna has further authenticated its validity and added, in addition, only the controls made before entering the ‘circuit bubble’.