Harmonic’s Omneon storage lineup has been well known in the playout and production market but now the company has taken the steps needed to hit a larger market: dropping the cost per Gigabyte. 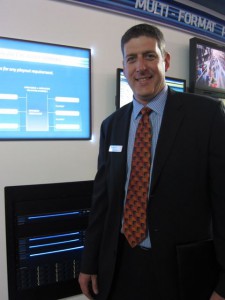 Geoff Stedman with the new MediaDeck 7000

“For MediaGrid 3.0 we changed the way we wrote data to the system and dropped the cost per Gigabyte,” says Geoff Stedman who was recently promoted to oversee the storage side of the Harmonic portfolio. “We simplified the operation of the system and it is now at a parity on a cost per capacity basis with other systems in the market.”

And now, with the ability to work with files that are on a per frame basis the system is also more optimized for work in post-production environments.

“Our focus is still on great performance but now we have tackled things like latency and access speeds so we can deliver the required capabilities without a cost penalty, and that is a big step for us,” adds Stedman.

Also new is MediaDeck 7000, a one-rack unit with four storage drives and four channels. In addition, the company is adding new I/O modules to its recently introduced Omneon MediaPort 7000 Series that supports MPEG-2 encode and simultaneous generation of H.264 proxies.

The MediaDeck 7000 system is the newest member of the Spectrum media server family, and it offers multiple-codec playback up/down/crossconversion, HD/SD simulcast capabilities, and two-channel modularity. Supporting all members of the MediaPort 7000 family of I/O modules, the MediaDeck 7000 server is for applications requiring two to four channels in an integrated 1-RU package. The system also embraces a universal decode concept on playout so that additional formats can be added.

“It’s also the right form factor for trucks, a simple box to record content and use our tools or third party controls from companies like DNF or other high-tech controllers,” says Stedman. “For some workflows the extra video processing provided by EVS servers is not required and this is a great solution for those applications.”