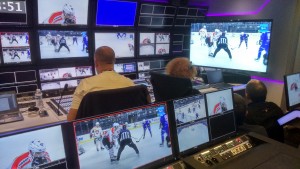 In a recent landmark development, the 4EVER-2 consortium produced test coverage of an ice hockey game in HD-HFR format at 100fps, and used Dolby AC-4 for the audio. The resulting live coverage was delivered via satellite.

Almost five years ago a French public investment fund and additional monetary resources provided by the Brittany and Ile de France local authorities funded a full scale laboratory for technical research. From 2012 to 2015 the goal of the 4EVER collaborative project was to further advance French research concerning the HEVC standard and the UHD-TV format. Since 2016, nine industrial and academic partners have continued with the project, which was renamed 4EVER-2.

“The 4EVER-2 project seeks to provide significant improvement in video experience quality. The idea is to give everyone a truly enhanced experience either at home, in the cinema or on mobile devices, but at the same time manage the impact on production and distribution,” said Maryline Claire-Charrier, who is in charge of the project at Orange Lab.

The consortium will end its activities in June and will be reviewing the results and various achievements at Futur en Seine, the digital innovation festival taking place in Paris during the same month.

4-EVER 1 and 2 used sports events extensively as a testing ground on which to develop UHD and its various options.

The French Ice Hockey Federation organised a friendly match between France and Switzerland on 9 April, before the upcoming championships that take place in Paris and Cologne in May. As the game was not set to be broadcast by a television channel it provided the ideal foundation for a new production test by the consortium.

“We felt that ice hockey seemed like the ideal sport to test the advantages of HFR. In fact, ice hockey players move extremely rapidly and the puck is not always very visible in a traditional production,” explained Ephrem Garreau, who is in charge of operations at AMP Visual TV.

The Millenium Signature 12 OB truck was used for the occasion, and six Sony HDC-4300 cameras with full HD 100p resolution were placed around the ice rink.

“In order to compare the results we placed a 100p camera next to a 50i. The test served to illustrate that both the player’s movements and the puck in a fixed frame, and also in a panoramic shot, are more fluid and detailed in HD-HFR than with normal HD. We also noted that in terms of lighting the ice rink, 1000 lux of evenly distributed light was necessary to obtain a good result. We’ll also have to see what the production will be like if there are pitch-side LED advertising boards. If that is the case some additional configurations will probably be necessary,” added Garreau.

Cameras, switchers, servers and EVS LSM equipment were all in 100p resolution; however, in the production truck only the monitor was in 100p format.

“At the moment we only have a prototype of a HFR capable LG-E7 monitor that supports 100fps, but the market is developing rapidly. In any case the test has proven that HFR is really interesting. 4K HFR should also help drive development in the near-future,” concluded Claire-Charrier.

AC-4 Dolby is able to carry channel and object-based programming so it can provide personalised audio experiences for television audiences, for example the choice of commentary in different languages. For this test content was encoded in 5.1 multichannel audio with a Dolby AC-4 audio encoder.