The global game of football continues to drive technical innovation as well as the broader consumer electronics industry and Saturday’s Champions League Final in Berlin was no exception. UEFA’s 4K production of the match proved that developments related to 4K cameras and lenses in the past six months are ready to make a difference and overcome many of the first-generation 4K production difficulties. 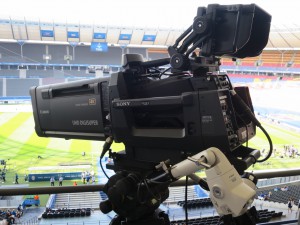 The second difference was the production quality. Prior to the first quarter of 2015 any evaluation of a 4K sports production began with a very large negative: the lack of a true 4K camera that offered the depth of field and focus that is required for a live sports event. That not only challenged camera operators to work hard to rack focus but also to maintain focus on the object of interest.

The new Sony HDC-4300 cameras solve those issues. The result, from a viewing standpoint, was a more consistent production where the entire image was in focus, giving the viewer a true sense of sitting in the stands.

HD, of course, has provided a similar sense of sitting in the stands. But that is why the third part of the equation on display in Berlin (and across 13 Sky sports bars across Germany) was so important: the size and quality of the display. It measured 85 inches diagonally and when sitting at a proper viewing distance of 1.5 picture heights (approximately six or seven feet) the emotional impact of 4K was palpable. Expressions on player’s faces were readily apparent and tattoos on player’s arms and legs were detailed. And of course the textures of hair, uniforms, the field, and more were also discernable. It was, simply put, an amazing experience swimming in visual information overload.

There is still plenty of work to be done with respect to 4K production and even more work to be done when it comes to UHD distribution. But UEFA’s efforts in 2015 lay the foundation for UHD football production in 2016 that will transform not only the Champions League but also UEFA’s Euro 2016 tournament next June and July in France. And given what was on display this year (and anticipated improvements between now and next year from not only Sony but also nearly every other equipment manufacturer) it appears the public will have plenty of reasons to make the investment in 4K/UHD consumer displays.