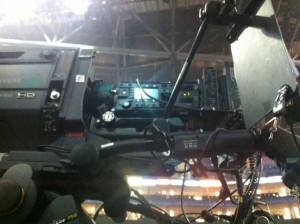 Late October saw OB specialist CTV undertake its first 4K shoot when it pitched up at the O2 Arena in London to capture two shows on Peter Gabriel’s acclaimed ‘Back to Front’ tour. Already into its second year, ‘Back to Front’ finds the Real World impresario and former Genesis frontman revisiting his classic 1986 breakthrough album, ‘So’, as well as other selected favourites from throughout his solo career.

CTV OB technical director Hamish Greig tells SVG Europe that the company was brought onto the project about six weeks before the shoot. The motivation for taking part was essentially two-fold, says Greig: “Firstly, we wanted to show that we can do 4K. Secondly, we knew that this would be a really great learning curve for our camera and engineering crews.”

Deciding to deploy their OB10 golf cart with some crucial modifications, CTV OB elicited the advice and guidance of Sony (whose PMW-F55 4K cameras were used for the shoot) and Fujinon (lenses) during the run-up period. Both nights at the O2 were filmed in full, with seven cameras on the first night and eleven on the second. In addition, CTV filmed extensive rehearsal and soundcheck footage for a forthcoming concert movie that is expected to be released in spring 2014.

“We could only get access to the venue at 5am on the day of the first show, so we were on a very tight turnaround,” recalls Greig. “The cameras had to be fully modified and ready to go, and we had to make sure that everything was pieced together really accurately. It was a very busy few days…”

Shooting simultaneously in HD and 4K at 23.98 fps, CTV recorded all footage onto Sony AXS-R5 16-bit RAW recorders. In a revelation that underlines quite how data-heavy the new format is, Greig notes that each camera generated 1.5TB per show – a total of 16.5TB for the complete concert: “Oh yes, it’s a hell of a lot of data…”

Describing the shoot as “an amazing learning experience”, Greig says that one of the primary lessons to take into future 4K filming will be the need to enhance “proper lens control… It’s so important for making a 4K shoot work successfully.”

There is a potential second 4K project on the horizon, but “whether or not it happens is still very open at this stage,” remarks Greig. What is definitely happening is the construction of CTV’s own 4K-ready truck. “We’re working on the selection of equipment right now and expect the truck to be ready for operation in April 2014.”