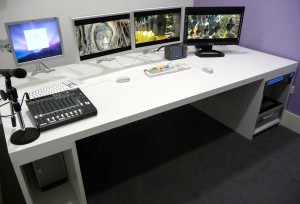 “The original furniture was designed and produced to fit the network’s operational and space requirements back in 2009, including the white finish specified by the building’s architects,” comments Custom Consoles’ Managing Director Neil Reed. “Each desk has proved ergonomically efficient and highly resilient to the wear and tear it has been subjected during three years of very active use,” he adds. “The four new edit suite desks are all to the same specification as the originals. Installation was done in four separate phases to ensure that at least three of the suites were always fully operational.”

“White-surfaced desks have become very popular in recent years,” adds Sales Manager Gary Fuller. “They are easy to keep clean and can make the entire working environment look very modern. The four newly installed video edit suite desks each incorporate a ventilated computer storage pedestal at the operator’s left and a 13 rack-unit equipment storage bay on the right. Three flat-panel picture monitors on Ergotron mounts are located at the rear of each desk. A fourth picture display sits on the desktop.”