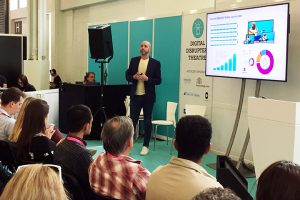 BT Sport’s newly appointed director of mobile strategy Matt Stagg used a presentation at the Media Production Show in London to once again extol the virtues of 5G mobile and how it could transform live contribution within broadcast television.

During a seminar called ‘The Future of Entertainment on the Move’ (Wednesday 13 June), the former head of media and entertainment technology at EE said that because of 5G’s low latency – at less than 1 Millisecond compared to 4G’s 50-80 Milliseconds – the technology would open up huge possibilities for remote production within news and sport.

“5G provides a guaranteed bit rate and latency,” he said. “This means we can create a service with proper Service Level Agreements that becomes a viable solution for replacing satellite trucks. With 5G, everything can be done remotely using 5G cameras. We’ll start to see a lot more within the contribution side. It’s one of the best use cases for 5G.”

Currently, the 4G mobile network is only used by broadcasters as a “last resort”, he added, describing it as merely a “best effort service.”

Stagg also reiterated a previous assertion that 5GXCast, a development of 5G for one-to-many transmission, might one day replace Digital Terrestrial Television (DTT) as a means of broadcasting television channels. He said 5GXCast was the “only technology” capable of succeeding DTT but that “it’s not there yet” and still needs further development.

The first commercial 5G services are expected to launch in 2020.

Stagg was speaking at the Media Production Show which took place at London’s Olympia on 12 and 13 June 2018.