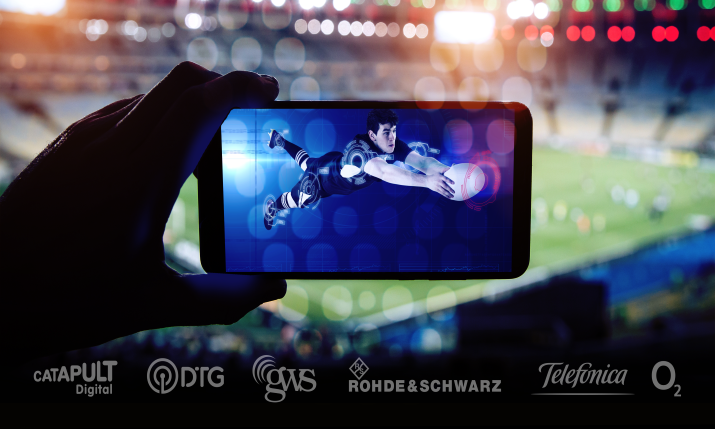 A landmark project using 5G broadcast technology to supercharge the way fans interact with live sport in the stadium, named 5G Vista, has been piloted at a major sporting event in the UK.

A group of fans at the match between MK Dons and Ipswich Town on 12 February were able to try out a prototype of the 5G Vista app. This allowed them to view six high quality live streams of different perspectives of the game – including behind the scenes footage – with the tap of a screen.

Not only does 5G broadcast technology allow spectators to get even closer to the action at live events, but it has the potential to offer solutions to a number of pain points experienced by broadcasters and TV crews at events venues and stadiums. This includes overcoming challenges associated with cabling and network complexity, and unstable 4G networks during events with a large number of attendees.

Alex Buchan, strategic technologist at the DTG and project lead on 5G Vista, said: “DTG, through the Vista project, is proud to be leading the TV industry into a new phase of interactive, personalised and live content driven by 5G for access anywhere, anytime. The trial at MK Dons shows the technology developed during the project has the potential to transform the way we consume content, and experience live events, over the coming decade.”

Digital Infrastructure Minister Julia Lopez said: “5G has the power to further fans’ enjoyment of live sports in stadiums while helping broadcasters to improve their live output. I’m delighted that this trial is the latest in a long list of cutting edge tests we’ve funded through our £200 million programme to use 5G to drive economic growth and improve people’s lives.”

The completion of the technical trial was followed by a final showcase of the project on 14 February as part of the MK5G Create event in the Marshall Arena, also at Stadium MK.

MK5G showcased several ground-breaking applications illustrating how major venues can harness 5G to operate in the future, including autonomous vehicles for transporting fans to and from the stadium, and AI-enabled traffic control onsite.

These demonstrations included a drone race around the MK Dons football pitch filmed from multiple perspectives using the 5G Vista app, as the final milestone of the 5G Vista project. This constituted the world’s first drone race broadcast in high definition, sponsored by Virgin Media O2 and organised by the British Drone Racing Association.

Both 5G Vista and MK5G had received funding from the Department for Digital Culture, Media and Sport to boost live events using 5G. 5G VISTA was backed by £1.3 million, with a further £1 million contributed by partners.