A legend and a gentleman: The sports broadcasting industry pays tribute to Barry Johnstone 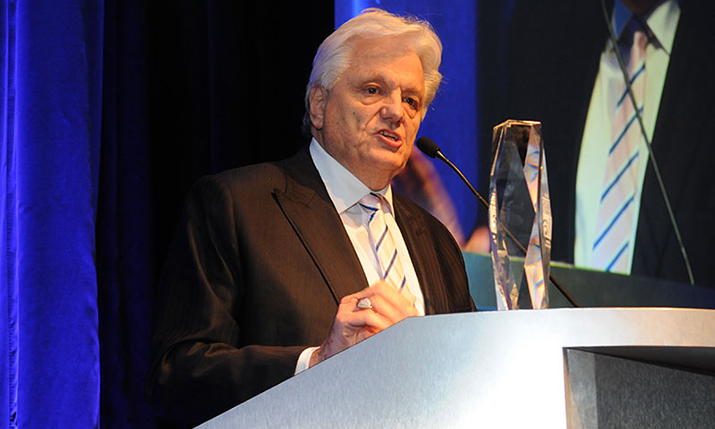 Tributes have been pouring in for Barry Johnstone, the chairman of EMG UK and the founder of CTV Outside Broadcasts, who passed away last week.

The words’ legend’ and’ gentleman’ appear frequently in what are very heartfelt and genuine appreciations of his contribution to the sports broadcasting industry.

Johnstone died at the age of just 76, following a heart attack.

SVG editorial director Ken Kerschbaumer described Barry as being “in equal part, industry colleague, friend, and even mentor. I was so looking forward to spending some quality time with him at the Open Championship and I will miss being called “young Kenneth,” sharing meals, laughs, and hearing his amazing stories. Miss you Barry. But what a legacy you leave behind both professionally and personally.”

SVG Europe Advisory Board chairman Alessandro Reitano said: “I remember him throughout the years as always being fun-loving, sincere, hard-working and fighting for the cause. And I remember very well when he took me on side after I was appointed Chairman of the SVG Europe Advisory Board and offered his help and support whenever I needed it. Most recently at NAB, I had a lively conversation with him about a social project that he wanted to implement in the SVG Europe group to help those working in sports broadcasting, which really typified his ongoing support for the industry. I will definitely miss him.”

David Shield, SVP, director of engineering and technical worldwide at IMG Studios, and a former chair of the SVG Europe Advisory Board, knew Barry for more than 30 years. “I have always counted him as a true friend, mentor and source of much respected good advice,” he said. “He was a great support to me personally in my time as Chairman of the SVG Europe Advisory Board, and he truly cared for our industry and the people who worked within it. He will be sadly missed by us all.”

Shaun Gregory, the CEO of EMG, said: “Barry held several board roles within EMG, most notably serving as our UK Chairman. However, he was much more than that, offering help and support to everyone across the EMG family. It’s why this news has been so devasting for everybody, both within EMG, and across the industry. We’ve lost one of the ‘good guys’ and there’s a void that no one else will ever be able to fill. Our thoughts are with Barry’s family and I feel honoured and privileged to have worked alongside such an incredible person.”

Inga Ruehl, Sky Sports, executive director of production and operations described his passing as a “truly a sad day for the sports broadcasting industry,” adding, “Barry was a pioneer and icon in our field and truly left his mark. His exuberance and passion were so infectious and made it so wonderful to work with him. Our thoughts are with his family and loved ones.’

Steven Cozort of SCC Productions said: “The word “leader” is what comes to mind when I think of Berry. He not only help lead the direction of our industry but led, guided and mentored a great number of individuals within the broadcast industry. God Bless and Rest In Peace, Barry.”

Darren Long, formerly of Sky Sports and now an industry consultant, commenting on Linkedin, described him as a “true legend in the OB world who will be greatly missed by all of us and someone I owe so much to for all his many years of support to me.”

Andy Hayford, business development manager at ARRI Cine Technik said Barry was “a real gentleman, who always had time and patience even when I was young and ‘wet behind the ears’ and continued to be passionate about his company and his team.”

Greg Livermore, CTV Outside Broadcasts, technical project manager, said: “Always up for a challenge, he would relentlessly chase down every opportunity. Around a table of professionals, you could get lost in his knowledge of the industry, its technology and its future. In truth, we worked for him, personally. We would have gone to any lengths if he had thought it the right thing to do.”

EMG head of special projects and innovation Adam Berger added: “For nearly 20 years I have been one of many who worked and laughed alongside Barry. He always quoted “I am just a salesman” he was so much more than that. He was an inspirational leader, a skilled negotiator, a tactician, a character, a friend, a gentleman, and a human being. The world will miss him. I just hope there’s a large glass of Cloudy Bay waiting for him up there with Libby. Rest well Sport. Your legacy lives on.”

Barney Francis, VP of global production at IMG said: “A legend of the industry, and more importantly a wonderful man. So grateful to have shared some of his wise counsel over the last 25 years. Truly a very sad day. Love and thoughts to Barry’s family and close colleagues. A very bright light has just gone out.”

Roger Moffat, global head of playback analytics, Prime Video, said: “The saddest news to enter summer. 30 years ago I ran VT operations for Barry’s studio in St Johns Wood and his obvious passion for the business was infectious. Barry exuded confidence, and to borrow a phrase from my current home, customer obsession. He was the centre of gravity for an increasing number of extraordinarily talented editors, engineers and outside broadcast experts who were captivated by his vision and energy and propelled CTV to the fore. My condolences to his family. RIP Barry.”

Paul Knight, who worked as Barry’s private chauffeur between 2004 and 2020, described him as “a kind and generous man with a well-developed wit.”

He added: “I never knew him to be anything other than a true gent. I always felt sure that he would be a fair but formidable adversary in the boardroom, although I can’t imagine that he ever had any enemies. There were many drives and miles covered, both in the name of work mainly for CTV-and also on special occasions such as his daughter Lucie’s wedding. On one occasion we delivered furniture to his son Adam, and often were involved in picking up his other son Ben from the airport when he periodically returned home from the States, to the delight of Barry and his wife Libby. Black tie events in London, business dinners a huge amount of business airport trips….and one morning stuck in traffic for 2 hours on the A40, when I accidentally discovered Barry’s love of Bruce Springsteen-whose hits were then played in the car at a disproportionately loud volume while we waited for traffic to clear. Dear Barry. They broke the mould when they made you. God bless and rest in peace.”

This article will be updated as further homages are paid. To provide your own tribute, please email will@sportsvideo.org