Next Generation Audio Summit: a year of progress in NGA technologies 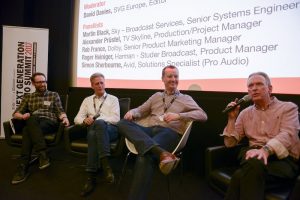 The 2016 Next Generation Audio Summit depicted an industry approaching a paradigm shift thanks to the advent of object-based audio and 3D sound. With some significant trials taking place at major sports events over the last 12 months, is mass adoption for NGA now in imminent prospect? At the Dolby Theatre in Soho, broadcast service providers and vendors provided their thoughts in this scene-setting panel session.

“One of the key things with Next Generation Audio is how we can create new content experiences,” said Rob France, Dolby Senior Product Marketing Manager to open the discussion. “Things that work for stereo audio as well: things like better loudness management; the ability to have enhanced dialogue even when the dialogue is separate; and more audio to consumers in a more efficient way.

“There’s a lot we can do for stereo viewers and content without changing anything, but how do we take things forward? How can we bring Dolby Atmos immersive audio to consumers? How can we give them that personalisation and desire that people have around sports like a commentator who supports the team or less/more of the commentary available?

“And then there’s the part around accessibility – the need for things like having an audio description track to go alongside, these become much easier when we start to think of audio as separate elements that are blended together in the consumer device. Much more control by the consumer in the way they wish to receive content. Clearer dialogue benefits so many people. Can consumers get access to these features in a way that makes sense? So, immersive audio, personalisation and enhanced accessibility” are top of the NGA agenda for France.

Moderator and SVG Europe Editor David Davies took things ‘back to basics’ by then asking France to describe, for those who may not yet be clear, what is Dolby Atmos? “We wanted to separate the content production side from the replay device side,” he said. “When 5.1 came about, we were really targeting a set of users who had a specific system configuration. When we started looking at Dolby Atmos, listening on headphones was a key use-case, sound-bars were established, and home theatre systems were common.

“We realised that the number of speakers had nothing to do with the way we created the content, so we needed to separate the two. Ultimately, Dolby Atmos allows us to say ‘right, a sound should come from this area or this particular spot in the room’ and then allow the replay system to do the best it can with the number of speakers available to it, using technologies such as virtualisation where required. We needed to be able to reflect sound off ceilings, to virtualise height and virtualise surround,” said France.

“The initial impetus came from cinema. Sport in fact has been one of the last areas to start to think about Dolby Atmos, and I think a lot of that is just around live production challenges. You can’t rewind and say ‘oh the dialogue wasn’t clear enough in the stereo downmix’. It’s got to be reproduceable week in and week out: with Sky we’re producing three or four English Premier League matches every weekend.

“With Dolby Atmos it’s about flexibility, giving people more choices. We want to create a flexible set of tools, to help people bring content to life.”

Which areas of news, sports and entertainment will drive NGA adoption?

“I think the channel count is one thing – perhaps in the broadcast business this is not such a big problem. On the Infinity we currently do more than 1,000 full-blown DSP channels. The competition is not far away.

“That’s not the biggest issue. One thing is currently the rendering on engines like the Dolby DP590 for monitoring and that is a quite complicated implementation if you want to have a good solution,” said Heiniger.

“The most complicated thing is AFL listening, i.e. an AFL source which is in the 3D space I have to render if I want to listen to it AFL. That means the signal has to be sent to the Dolby engine: the Dolby engine has to put it into place in the 3D space and send it back the monitoring information, and then we have to mix it together with the local AFL bus to get the signal. So there’s a lot of implementation, integration and partnering with devices like the Dolby Atmos system,” he said.

Simon Sherbourne, Avid, Pro Audio Solutions Specialist, was asked if it is going to be live music and entertainment, rather than sports, that drives the uptake of NGA technologies?

“Well, going on the conversations we’ve had at recent trade shows, it actually seems to be more in the area of live events, music festivals, state ceremonies – events where people want to feel like they are there. Sports is a given; it’s a premium driver for any service. But in terms of broadening that out, I think it’s going to be festivals that will drive it forward.

“The primary focus for Avid – as we don’t really get involved in the live broadcast audio mixing stage of the flow – [entails] music consoles and in-venue sound as well as post-production. So the big next step for our venue sound reinforcement team is to support immersive sound in-venue in such a way that it doesn’t change the workflow and will then tie into any kind of broadcast that is coming from those sources as well,” said Sherbourne.

“Our team is really trying to concentrate on making the console very agnostic to the format – panels that work in the same way whether you’re working in traditional formats, objects, VR. It doesn’t have to be that complicated. We already have the channel and processing capability there, so it’s more about finding the interface to drive these renderers without too much re-training,” he said.

How Sky Sports has rolled out Dolby Atmos for the EPL

Sky Sports has introduced Dolby Atmos with every English Premier League game – 124 matches in total – that it is broadcasting this season. David Davies asked Martin Black, Sky – Broadcast Services, Senior Systems Engineer & Sound Consultant, how this roll-out has gone and how Dolby Atmos might be introduced to other sports in the Sky Sports portfolio.

“When we launched 5.1, which was ten years ago now, it was initially for Premier League football then rolled out to cricket, darts, boxing and then pretty much everything. It rolled out relatively quickly.

“I don’t think that’s necessarily going to happen as speedily with Atmos. That’s partially to do with the extra hardware requirements. The Dolby equipment we’re using – because it’s live we need black boxes – you need them in quantity to do things on a bigger scale. That will be a hand in glove discussion.

“I do think it’s only a matter of time that all the other bits of infrastructure develop: and it’s not just sports of course, as we do UHD and Dolby Atmos for some of our premium entertainment content for the Sky Q box as well. I don’t have a timescale at the moment, but there are plans beyond the so far very successful roll-out on the EPL this season.”

As for the learning curve the Sky Sports team has gone through in introducing Dolby Atmos coverage for the EPL this season Black said, “we had very much a parallel learning curve with 5.1, which accompanied our HD launch. This is just another generation if you like. We knew from that that we would get to a point where our workflow would end up being almost exactly similar post-5.1 as pre-5.1.

“In that case we really concentrated on the whole issue of downmix, as we needed to be able to produce our stereo on our mono at the same time – as we were obviously going to be doing this out of one truck with one mixer.

“In terms of 5.1 we got to a point where we could have an acceptable compromise – which is what these things always are! – between the stereo, the 5.1 and the mono,” said Black.

“So when we introduced Dolby Atmos we obviously looked at it in exactly the same way and said ‘OK, how are we going to get to a point where we can still do 5.1 and stereo and mono when we’re mixing Dolby Atmos?’ So we actually approached it as a layered-on-top thing from a mixing point of view, and for this season we’re actually generating the 5.1 as a separate bus output; therefore it’s delivered as a separate Dolby stream in the set-top box so that when you switch back to 5.1 or Dolby Digital then you get back to the 5.1 you would have done before.

“But it is still produced out of the same desk using the same elements, and the mix busses are just used as separate outputs so that the Atmos feed has height information in it whereas the 5.1 does not,” he said.

“So at the moment we’re not downmixing the Atmos to the 5.1 because obviously those are the driving elements of the main coverage for HD and SD as well; it was very important that we kept all that intact. For this EPL season we didn’t create it for a downmix but what we have been doing is monitoring the downmix of the Atmos to ascertain if that’s a practicality – which so far the indications are that it will be. So there’s a very good chance we will have exactly the same workflow as we previously had for 5.1,” concluded Black.