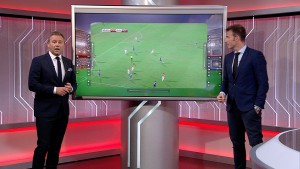 Studio 1 at the Ullevaal Media Center in Oslo

The Norwegian national football team, Vålerenga IF, has as its home the largest football stadium in Norway. The 30,000-seat Ullevaal Stadion, located in Oslo, is the site of the Norwegian Cup Final and also plays to Ullevaal Media Center and its broadcast facilities.

The European football scene is heating up in anticipation of the Euro 2016 Tournament to be held in France from June 10 through July 10, 2016. For the first time, 24 teams will qualify for the month-long men’s national team European Championship competition. With Norway currently standing third in the Group H standings, the pressure is on for the Norwegian national team and their coach, Per-Mathias Høgmo.

To minimise disruption to national league matches, Euro qualifying games are frequently played on the same day. Ullevaal Media Center downlinks up to eight simultaneous games, which allows presenters to package the Euro tournament and provide live coverage of the Norwegian national team games wherever they are being played. Discovery has the distribution rights for the European Qualifiers in Norway and distribute game coverage on the Max and TVNorge channels. To ensure fans are informed and entertained before, during and after matches, Ullevaal Media Center has installed multiple Abekas Mira Instant Replay servers.

Outputs from the Mira servers are broadcast by Ullevaal Media Center’s national broadcast partners, as well as to YouTube, the national football team’s Topfotball website, and a 10m wide video screen in the studio. 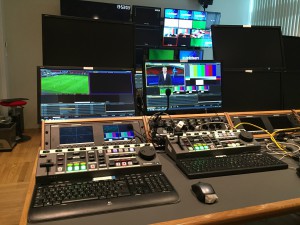 The nature of simulcast games means the broadcast infrastructure needs flexibility. This is one of the primary reasons Ullevaal Media Center chose Abekas Mira Instant Replay servers, ultimately installing two separate eight-channel Mira servers, each with two Mira Control Surface panels which allows each server to be operated in dual-user mode. Each Mira server is configured with native AVC-Intra recording, and each one stores up to 180 hours of recorded media content.

According to veteran EVS operator Mathias Kristiansen, who now operates the Mira servers and teaches other freelance operators how to run the system: “we needed a video server system that allows us to rapidly create highlights. We evaluated a number of replay servers before we settled on Mira—and chose it for its overall speed of operation, intuitive interface and expansive configuration flexibility.”

One of the key attractions to Mira was how ease of interface to other systems in the Ullevaal Media broadcast operations center. On-air presenters use a combination of Reality Check Systems RCS LaunchPad and Ericsson Piero during live highlight shows, in order to present game analysis.

Seamless integration between the Mira video servers and both the RCS LaunchPad and the Ericsson Piero is achieved with the Mira server native Ethernet control API. This tightly integrated control interface allows presenters to quickly and easily review earlier plays by triggering “clip load”, “clip play” and “clip stop” commands in the Mira servers from the on-set touch-screen interface during live productions.

Sharing media content from the Mira video servers is another key requirement for the broadcast team. As part of the workflow, the Mira Control Surface is used to quickly clip off and label content, and then to seamlessly export AVC-I MXF media files to their Adobe Premiere editing station. Ullevaal Media Center is also taking advantage of the new ‘Multiple Export Destinations’ feature supported by the latest Mira server V5.5.0 software – which allows an operator to define up to nine Export Destinations – each with: media file type; whether to export a Playlist as one or many media files; whether to add 5:00 Heads and Tails to each media file; as well as the local or network pathway to the given destination.

“We need to rapidly reconfigure our replay system to meet the fluctuating demands of the broadcast,” explains Kristiansen. “This means dynamically changing a channel from being an input to an output. With other video servers we’ve used in the past, this simple reconfiguration required us to completely reboot the server, and wait up to fifteen minutes for the server to come back on-line. With the Mira video servers, video channel reconfiguration is achieved with a single mouse click, and all video channels are instantly available.”