Aerial Camera Systems (ACS) has stated that the first trial of its new camera system RF Pico Move for use in live rugby matches has been a success. 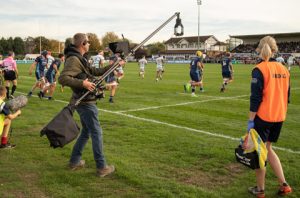 At the weekend ACS carried out a trial with Sky Sports at Richmond Athletic Ground in London, filming London Scottish vs London Irish in the RFU Championship. The trial was designed to see how the kit worked in a live rugby environment from the perspective of production, and also fans watching at the ground.

Commented Matt Coyde, sales director at ACS: “The trial with Sky Sports went very well. We used it in the build up to the match and throughout the game. It was used for live output and replay shots, as well as aspects such as warms ups, teams out onto the pitch, and handshakes at the end of play.

“Sky Sports was very pleased with the trial,” Coyde noted. “The next step is to look at how it could be used in their future rugby coverage this autumn.”

Coyde added that, importantly, RF Pico Move did not generate any complaints from the club or fans on the day: “There didn’t seem to be any objections from the crowd or players about its use; you have to make sure you’re making sure you’re working within the regulations of live rugby coverage, and not to upset the crowd or block their view of the play because that can then be fed back through the club to the production team — and then limit how you can use the kit in future. It’s important to keep everyone on-side and happy.”

Announced at IBC, the new system has previously been trialled at golf events. During those trials it was used to get ‘in the action’ crowd shots, as well as being flexible and lightweight enough to follow golfers around the course to achieve angles not normally possible.

The idea for RF Pico Move came from the company’s business development engineer, Paul Munday. Commented Coyde: “This was driven by one of our engineers who had the idea for a roaming live polecam. We then thought it would be a great idea to combine that with the capability of Antelope Pico, with a transmission system and radio control for camera functions from Broadcast RF. We were excited about getting that configuration, but it took quite a lot of development to achieve.”

ACS needed to create a lightweight dual channel RF transmission system and it also had to develop the radio control system for the camera onboard record device for EVS operator control in the OB. 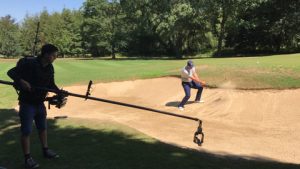 “As well as offering live output, we can also provide a second channel for record, replay and high frame rate output; it’s a really efficient operation,” he said.

Coyde added: “He [Munday] is tasked with looking at new technologies or developing new ideas that we can bring to our clients. We’re all very busy on the management side, so sometimes we can miss a trick as we’re caught up with the day to day, so Paul’s specific role is to engage with those applications to do things in a different way, from small things to big development projects. It could just be a new application of an existing system, or something completely new.”

The golf trials were carried out at the GolfSixes, part of the European Tour, in May this year at the Centurion Club in St Albans in England. Said Coyde: “As the new idea was to try and bring different camera angles into filming golf, we got crowd shots getting in amongst people, and some jib-like movements getting up close to the players, which isn’t possible with a traditional jib because of it its size and weight. The footprint of this new system is much more flexible and you can reposition it much faster.”

Coyde concluded that while industry trends are focused on the likes of UHD and HDR, ACS believes there is a lot of potential still in the realm of niche cameras. “We think the specialist camera market has a lot of opportunities. We try to come up with new concepts for people to utilise in their productions, while being mindful of what people can use in their budgets. It’s a delicate balance, but there is a definite need and desire to bring new [camera] ideas to market.”