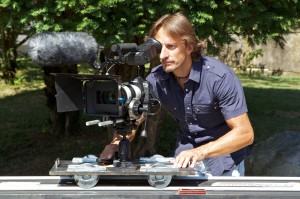 Based in Italy, TV production company Actionmovie is widely acclaimed for its sports-related video and photo services, and among its credits is a production and partner role for sports show Adrenalinik. Directed by Valeria Mondello, the programme is broadcast on satellite and Sky Sports channels.

Marco Orbassano, co-owner of Actionmovie, comments: “We have been producing an episode that airs every month several times. For the first time it is broadcast in the prime time and then it is repeated again some 15/20 times each month at different times, so it gives a huge boost to many audiences.”

Margaret Grueninger, the other partner of Actionmovie, adds: “There are other projects in the pipeline, for example Sky Sports asked us to produce for them some video materials useful for signature tunes, and stings and indents for some important sports-based broadcasts ….”

Adrenalinik, on the other hand, is the typical sports programme format with a target audience of young people. The formula is simple: no presenter connecting sports reports and the interviewee has the microphone directly in his/her hand.

A voiceover comments on the various disciplines, while overall the programme tries to report on sports that are not normally the subject of extensive TV coverage. Adrenalinik also deals with “a bit of everything”, but always with a different perspective from the TV channel that deals with major sports.

Orbassano remarks: “Sometimes in Adrenalinik we can add video content derived from large video productions like Redbull’s, but for the most part all videos are our production. All shots are taken mainly using digital SLR Canon 1D and 5D Mark II cameras. We work at 25p and then we also use a Sony Nex capable of shooting images in HD at 50p.”

To achieve the 26-minute programme, several electronic shooting systems are used on different locations. “We widely use also some Contour and GoPro 3 Black Edition cameras with their 120 fps in slow motion, which are critical for us,” remarks Orbassano. “The Contour is very practical for us from the point of view of control and functionality, since even with heavy gloves, skiing or motocross gloves, with a single slider we can start recording on the go.”

The basic images are beautiful, whilst a spectacular post-production adds a lot to the finished product. All the editing is done on a Mac with Final Cut X, plus integration with other software such as Color and Motion. Typically, workstations are based on four screens.

Each episode comprises four stories and graphics cuts which connect everything, created with Motion and Final Cut.

To create the various video services in addition to SLR cameras and larger cameras such as the Sony X1 or the Sony F3, Actionmovie always uses different grip equipment to support all shooting – such as motorised carts which carry out the time lapse in motion – and a mix of products like the Polish SlideKamera, a portable shooting system with small rails.

Orbassano adds: “We have built directly ourselves some other equipment in wood and we also built a sort of little funicular that allows you to mount a small Gopro camera and shoot up to 120m slide pan pulling two ropes among the trees. It is very useful, especially in the woods with mountain biking. It takes 20 minutes to install, we tend [to install] wires along the chosen route and then the camera slides down while shooting. We have also built another small crane: a special arm that shoots from an unnatural viewpoint but with good fluidity of the movement. And then we use a great deal of steadicam, like the Glidecam and steady artisan model, Sanda, produced by workshops in Moncalieri, Torino. It is a petite steadicam for use on minimum weight cameras such as a reflex. It is very functional and has allowed us to capture spectacular images of athletes moving at up to 126 km/h on skis.”