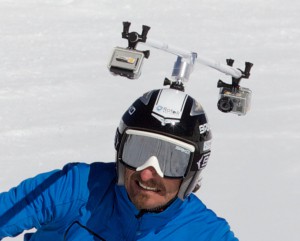 Actionmovie, a video company based in Somma Lombardo, Italy, was officially founded in 2007 from a fervent interest in sports, nature, video and photography. Right from the start, the two principals behind the company, Margaret Grueninger and Marco Orbassano, had a personal vision of a style that would blend ‘light educational’ and ‘action’ genres.

Orbassano comments: “In practice, in all our work we always manage to combine static images typically shooting on a tripod and others [that are] much more dynamic and alive, realising them as much as possible being ‘on’ the athlete.”

Grueninger adds: “We specialise, for example, in skiing and chase other skiers with difficult shots even at high speed, where many others cannot. When we started there was hardly anyone who had such a close contact with sports.”

Hence, the professional profile of Actionmovie is specialised in the filming of highly dramatic sports such skiing, motocross and mountain biking. Indeed, one of the endorsers is David Philippaerts, motocross world champion in 2008, while the company is also the reference point in the video for the Monte Rosa ski.

For Grueninger and Orbassano’s company, the adventure is very much ongoing, and in its latest project they have pioneered a new shooting device able to achieve subjective shots that are strikingly different from those offered by traditional views. The central premise was to avoid the usal shaking panoramic and instead propose ‘subjective on the subject’ of the sportsman on the scene.

Orbassano, who created the new device, explains: “I was interested in being able to produce something more and I thought to invent the ‘Rotor’. The first step was an experimental prototype built in my garage with rudimentary parts. There was a short rod fixed at the centre on the helmet, on which to mount two small mini action-cameras on either side, capable of rotating at 360°. The first tests carried out personally on a motocross track yielded truly exciting results. So we built a lighter, cheaper upgrade, fixing two Gopro cameras, launched the movie with great success on YouTube, and decided to patent with international extension.

“In practice, the rod is 1.40 m and each of the two cameras is fixed at 70cm from the fulcrum, respectively to the righ and the left of the helmet. The two cameras shoot convergent. The special rotor that rotates the rod is fixed in the centre of the rod on the helmet and the rod itself is fixed at 15° angle to the plane of rotation. The two mini cameras are tilted so that the high side of the frame just grazes the rotor support but without letting it be seen. The trick is evidently into the central dock on the helmet and the slight misalignment that in acceleration and braking causes the two cameras to move in rotation for centripetal force.

“The images produced are difficult to describe but a huge visual impact is guaranteed. [Consequently] you get a kind of micro crane mounted on a helmet which then realises a particular subjective, much emphasised by the wide angle field shot typical of Gopros, of 170°. This allows you to view, for example, all the dirt bikes, including the pilot and also the background, filming some beautiful shots that would otherwise be impossible.

“The standard model weighs only 1.4 kg and applications are many, but we must not exceed the speed. The patent does not cover the device itself, but rather the idea of filming a subject at 360 ° movement.”

The Rotor, and a new ‘twin sister’ in development, could also be very useful in teaching and the study of the movement.

Orbassano concludes: “Given that this idea has generated great interest worldwide, Actionmovie offers companies interested in its development the possibility of having to use the patent under contract and royalty.”