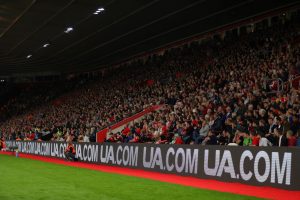 It means fans in the stadium will see traditional LED content, while viewers watching the same match in different countries could see brand content tailored to their region. Hence, a Virtual Hybrid system makes it possible to commercialise the same perimeter media space multiple times over. It means, for example, that 90 minutes of inventory could become 900 minutes if sold in 10 different territories.

Southampton FC’s commercial director, David Thomas, said: “We’re excited to be one of the first clubs in English football to have a fully functioning Virtual Hybrid system. Following a competitive selection process we chose ADI because of the functionality and quality of their technology. The market is clearly heading towards the adoption of virtual advertising, and there is definitely demand from sponsors. The ability to combine that functionality with a system that is UEFA compliant is extremely appealing to us.”

Virtual advertising is fast becoming a reality, with the perimeter system installed at St Mary’s Stadium using the same LED technology deployed in Germany’s Bundesliga, which has been delivering virtually modified match feeds since the start of the 2018/19 season. Meanwhile, in the UK, more clubs are gearing up for the arrival of virtual replacement, with 10 clubs having now invested in systems that have full Virtual Hybrid functionality, or have the ability to be easily upgraded. 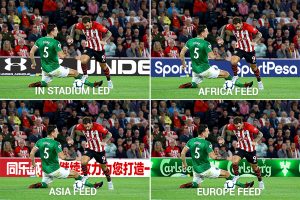 The perimeter display content, and any potential virtual ad insertion, will be remotely managed by a team at ADI’s fibre connected production hub, which connects over 100 stadia and broadcasters.

ADI’s CEO, Geraint Williams, commented: “We’ve worked with Southampton for a number of years and they’ve always displayed huge ambition. We are delighted to have the opportunity to help the club realise some of that ambition by taking their commercial platform to the next level.

“We’re entering a new era in the way clubs activate commercial partnerships. Sponsors are demanding greater value and more opportunities to reach their audiences, and virtual advertising certainly offers a platform through which to achieve that.”