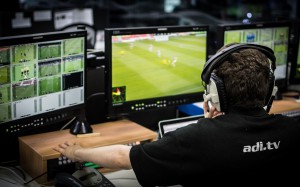 Sports broadcast network experts ADI will be playing an active role at this year’s IBC, with group CEO Geraint Williams set to take to the Adobe stand as one of their guest presentation speakers.

Williams will be talking about the ways in which ADI are integrating Adobe Anywhere into the sports production workflow across their Live Venue broadcast fibre network and how it’s being used by leading broadcasters to deliver sports content to fans in aquicker and more cost-effective way.

This August saw the rollout of Live Venue into Leagues One and Two, thereby overhauling the production workflow and for the first time making all Football League matches available live, as Williams explains: “In previous seasons, content for Leagues One and Two was only recorded locally, before being motorbike couriered to upload points for ingest, resulting in the footage not being made available until many hours after the final whistle. The rollout of our Live Venue fibre network now means that HD feeds are available in real time at our centralized Sports Hub and we’re then utilising Adobe Anywhere as part of our offering to sports broadcasters to provide a far more streamlined workflow for editing highlights.”

Specifically, Williams will be looking at the impact the workflow has had in enabling Football League highlights to move from a 11.30pm timeslot to 9pm this season, and helping the league reach a far wider audience each weekend.