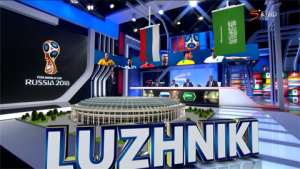 Also at the World Cup, AE Graphics provided the graphics elements for the BBC’s eye-catching studio at Red Square in Moscow.

For SuperSport AE Graphics designed a touchscreen system, including a fully integrated analysis system that was controlled by pundits using a tablet device driving AR content on the studio floor, and imitating the touchscreen analysis graphics displayed on the large studio screen. The company stated this, “offered a truly immersive feel”. 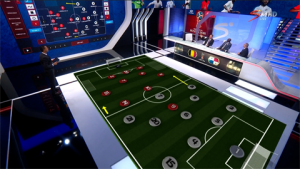 Multi-language graphics in both English and Portuguese were also being provided, featuring full integration with the official FIFA data feed for live match and player statistics.

Commented Stuart Coles, chief commercial officer at AE Graphics: “One of our most eye catching graphics was the scrolling ticker that was a constant presence and enabled producers to keep viewers up to date with the very latest developments throughout the tournament.”