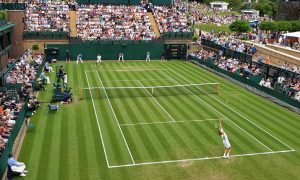 The All England Lawn Tennis Club (AELTC) continued its tradition of broadcast innovation by teaming up with Grabyo and LiveWire Sport over the course of the Championships 2019 to produce an all-new social-first live daily show.

Dubbed the Wimbledon Coffee Morning, the new live show was broadcast live to Twitter, YouTube and Facebook every morning during the Fortnight. The show reached over one million views.

Coffee Morning was launched to provide a new perspective on the tournament for tennis fans on social media. AELTC was able to capture the attention of vast social audiences with an interactive live video experience that added context to one of 2019’s major sporting events.

Modern sports audiences are looking for content that enriches the viewing experience of major events. Demand has risen sharply for behind the scenes access, insights on player performance and the chance for fans to participate in the viewing experience. By creating shareable events, publishers are able to drive up engagement and video watch times.

Produced by LiveWire Sport and delivered using Grabyo Producer, the Coffee Morning was broadcast on social before play began each day, giving fans a chance to connect with The Championships in the build up to the match schedule.

Designed to engage audiences on each platform, the show was highly interactive. The AELTC and LiveWire Sport used Grabyo’s partnership with social participation platform never.no to run and show the results of live polls on screen, and highlight social comments within the broadcast.

Viewers were encouraged to get involved with the show using the Wimbledon 2019 campaign hashtag #jointhestory. Fans from around the grounds, and at home, posted photos and comments using the hashtag and many of these were displayed during each broadcast.

Grabyo’s lightweight production platform enabled the show’s producers to mix live and VOD content to include engaging segments such as ‘what you missed’ and the Babolat racquet stringing challenge into each episode.

Gareth Capon, Grabyo CEO, commented: “Our long term partnership with the AELTC has delivered a number of exciting projects at the forefront of innovation in sports media. The Coffee Morning show is a testament to the AELTC’s commitment to delivering the best possible viewing experience for fans across its digital channels and a desire to explore new formats as they emerge. Live social shows are growing rapidly in popularity, especially around live events. The project was a huge success, it was great the team could utilise Grabyo’s live platform. We are proud to have played our part.”

Alexandra Willis, head of communications, content and digital at AELTC, added: “We are always excited to find new ways to bring fans closer to the Championships, particularly those who know less about tennis. Last year, we delivered our very first visual radio streams to social media during the gentlemen’s and ladies’ semi-finals with great success. This year we wanted to deliver more live content to fans in the build up to each day’s matchplay, in a socially engaging format which would help get the audience set for the day ahead. The Coffee Morning was designed to be a fun, accessible platform for all our fans, regardless of their tennis knowledge, and the response has been fantastic. We were also very pleased to be able to put out a quality live show with a small production footprint, showing that there are new ways to produce for social yet still create a memorable product worthy of the brand.”

Caroline Cheese, director and co-founder, LiveWire Sport, added: “We loved the challenge of giving a fresh and innovative look to the start of the Wimbledon day. The interactive nature of the Coffee Morning gave the Join The Story campaign a perfect home, highlighting unique and personal Wimbledon stories from inside the grounds as well as right across the globe. It was a delight as always to work with the AELTC and Grabyo to deliver a new social media experience for Wimbledon’s fans.”

The Coffee Morning show was a key pillar of AELTC’s live video strategy during the Championships. The AELTC also delivered more than 800 real time clips to its social channels, Wimbledon.com and the official apps using Grabyo Studio, achieving over 40 million views, and over 80 million social impressions.