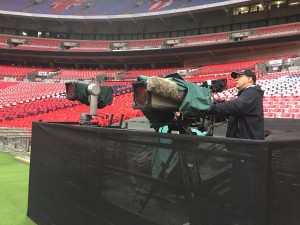 Aerial Camera Systems was appointed by CTV Outside Broadcast to provide remote Goal Camera systems for the recent London NFL matches at Wembley and Twickenham. Following a late request for a camera mounted on a Goalpost for the Jacksonville Jaguars vs Indianapolis Colts game on Sunday 2 October, ACS was able to successfully install and operate a SMARThead remote camera fitted with Sony P1 Camera, W/A lens and SMPTE Fibre Transmission system using a special bracket produced for a previous US based NFL test.

Providing a unique and high quality coverage angle of the NFL, two Goalcam systems were subsequently booked and successfully deployed for the following two matches at Twickenham and Wembley. This was the first time a sport other than rugby has been hosted at Twickenham stadium.

In addition to the Goalcam Systems, a SMARThead 3 system fitted with Sony P1 and Canon 100x lens was trialled for the final match at Wembley in the low-end zone supplementing an existing manned camera in order to understand whether its deployment could reduce the number of required venue seat kills without adversely impacting on coverage output. 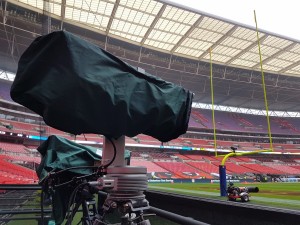 Bill Morris, CTV international business director, commented: “SMARThead is a great product, its ease of deployment, and its rugged reliability made it the perfect choice for the London NFL Games. The fact that it uses just one SMPTE cable for its operation makes rigging very straightforward. The US Directors were very happy with the resulting ‘Robo’ coverage.”

“We were delighted to be able to assist our colleagues at CTV with their robotics requirement for the recent London NFL matches and have subsequently received some great feedback from their end clients CBS and Fox regarding how well our SMARThead remote technology performed onsite. We look forward to working with them again for next year’s London series,” commented Matt Coyde, sales director for Aerial Camera Systems Ltd.