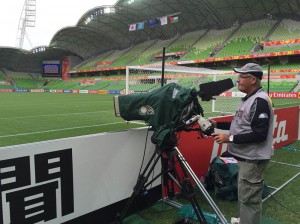 Following selection by the Football Federation of Australia (FFA) Asian Cup Broadcast Services (ACBS), the entity that is the combined efforts of Gearhouse Broadcast as technical facilitator, McGuire Media as production service provider and HBS as production consultant, is providing all the host broadcast services and facilities for the current AFC Asian Cup 2015 in Australia.

Gearhouse’s involvement in the AFC Asian Cup 2015 includes providing all the technical and broadcast facilities for the host broadcaster and international unilateral rights’ holders such as TV Asahi and NHK from Japan.

In total, Gearhouse is providing 18 cameras (consisting of Hitachi SK1200, SK1500 and NAC ultra slow motion cameras) at each of the five stadiums (Sydney, Melbourne, Brisbane, Newcastle and Canberra) linked into its fleet of HD supertrucks that also use the latest in EVS replays, Lawo audio, Vizrt graphics and Riedel comms systems. Gearhouse has also arranged fibre connectivity between the venues and the Stadium Australia transmission hub in Sydney.

Michael Brown, CEO of the AFC Asian Cup Local Organising Committee, added: “I’m delighted to say we have appointed a host broadcaster that has done the job with incredibly high standards and without any issues for us and our associated partners.”

Together with McGuire Media, Gearhouse has also increased the number of camera angles, replays and pre-planned sequences for the AFC Asian Cup. There are also more mics, audio and crowd effects than ever before at an Australian sporting event.

Papas concludes: “From a technical standpoint we have significantly raised the bar. As part of the host broadcast team Gearhouse is in essence its own client, which means we have to provide a seamless, full turnkey solution of the highest order that cannot fail. Fortunately we have much experience to draw on. Also, as all Gearhouse OB trucks are identical we have the added benefit of being able to mix and match crew without issues. This helps producers, directors and operators do their jobs to the best of their abilities which, in a high pressure broadcast environment, is absolutely critical.”