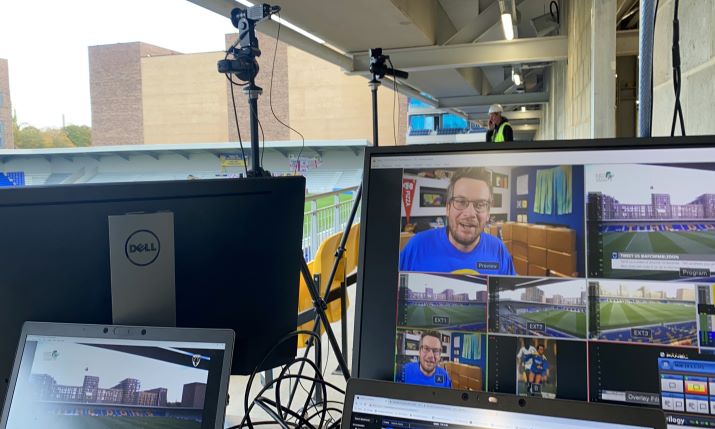 The occasion was the opening match at the football club’s new home, just metres away from its original stadium in Plough Lane, following almost two decades of fund-raising for the club. However, Wimbledon fans were unable to see their club’s return to Plough Lane in person because of COVID-19 regulations.

Broadcast Solutions was able to make the production happen with minimal crew. “We had to make it a great occasion for the fans,” said Malcolm Robinson, business development director, Broadcast Solutions UK, “and we had to achieve it with very little footprint.”

The initial live stream clocked up almost 20,000 views from dedicated fans at home.

Robinson and Adam Leah, creative director of live production technology specialists nxtedition, had been talking  for some time about how an event like this might work technically. The planning for this actual event came began with a 30 minute conversation between Robinson, Leah and Charlie Talbot of Talbot Productions, some two to three weeks prior to the event.

Wimbledon director and events producer, Talbot pulled together contributions from fans, former managers and ex-players. On the night, the team added live interviews and behind the scenes looks, while fans continued to contribute video comments via social media.

On the day of the match it took around 2.5 hours to set up. Robinson told SVG Europe: “The production was originally to be broadcast from one of the Wimbledon boxes, but last minute moved to the stands pitch side. As a lot of building work is still happening, the biggest challenge was getting power and relying on the public internet.”

Adds Robinson: “The aim was to be able to broadcast an event entirely from home, allowing a true remote production, or perhaps this should be called a collaborative production. Traditional remote production would still require operators to go to an OB truck or a studio, whereas our goal was quite simply that everyone could work from home. The only on site requirement was for the set up of the four cameras and the Dream Chip Barracuda HEVC encoder.

“The ultimate goal is to enable people to tell their stories and this is exactly what we achieved at Plough Lane,” Robinson went on, “with a simple, easy to use and extremely effective solution.”

With Robinson and Talbot on site, the third member of the team, Leah, was 1,000km away in Sweden. The Barracuda decoder and internet feeds from fans and the Mobile Viewpoint link also fed into the nxtedition cloud. Leah directed a seamless 105 minute show, cutting live multi-camera video with pre-packaged items and new content from social media.

“The technology worked perfectly,” Robinson said. “SRT allowed us to maintain really great quality on the live video which sat well alongside the crowdsourced content. We were also able to get reverse feeds over the internet, including a multiviewer as well as the rundown, so Charlie as producer had a complete overview and control. From end-to-end it was a very professional production.”

As in any broadcast operation, comms was absolutely vital to a seamless production. The Trilogy communications platform allowed the team to put virtual panels wherever they were needed, as well as earpieces for presenters. There was no latency in comms, allowing slick live links. Programme sound used Sennheiser wireless microphones.

“We set out to make a night to remember for the fans of AFC Wimbledon, but we achieved much more,” Robinson concluded. “This is the groundwork for a whole new approach to remote production. I was blown away by this as a demonstration of what can be achieved in live, remote, collaborative production.
“This can be scaled, and will transform the way we cover sport and events.”

The Plough Lane opening night was on 3 November 2020.