Ever since the SMPTE ST 2110 media IP standards began to be published in 2018 after many years of work, there has been an understandable interest in audio circles concerning the overall adoption of the standards group – and the implementation of the AES67 audio-over-IP interoperability standard in particular.

Underlining the impressive traction achieved by the AES standard since it was first introduced in 2013, ST 2110 obliges all digital audio streams to conform to AES67, with SDP metadata to be included for the purposes of stream reception and interpretation. There are, however, some differences between how AES67 works within ST 2110 and operation within the pure audio domain, including with regard to synchronisation and timing.

The non-profit Alliance for IP Media Solutions (AIMS) is one of the organisations most closely associated with the adoption of standards-based networking in professional AV. Terry Holton, chair of the AIMS Audio Working Group, indicates that momentum has continued to build since the publication of ST 2110. 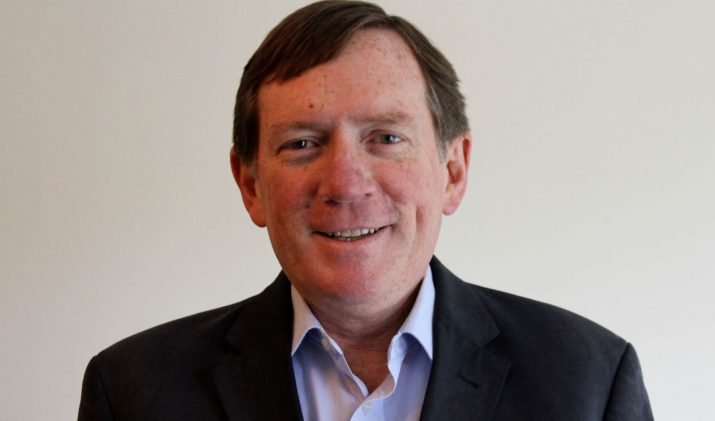 “AIMS has made considerable progress in its adoption of standards-based protocols for media interoperability over IP in the past year,” he said. “The broadcast and professional audio/video industries are the core focus of activities for AIMS, and the Alliance has been a driving force behind the IP Showcase events at the [most recent] NAB and IBC shows. These events provide the industry with valuable insights into IP media networking technology and standards developments, as well as providing the latest information about real-world use case examples.”

One particular milestone cited by Holton is the publication of the latest AIMS Roadmap for IP Media Networking. “While the AES67 and ST 2110 standards are at the core of this roadmap and define transportation of media and the synchronisation requirements, a number of other essential elements are also necessary in order to create a complete networking solution. All of these elements are identified in the latest version of the AIMS Roadmap,” he explained.

The maturity of any standards-based technology inevitably depends upon the availability of sufficient compliant product to build comprehensive operational ecosystems. In this regard, too, the last few years have been characterised by steady and sustained progress.

“The adoption of ST 2110 and AES67 among product manufacturers has advanced considerably in the past couple of years,” confirmed Holton. “Of course, a wide range of compatible products is necessary before end-users can configure complete systems based around these standards. We have now reached the point where this is now practical and achievable, resulting in a steady stream of systems being installed around the world.”

Where IP-based infrastructures are being implemented in established facilities, co-existence with legacy technologies is likely to be the favoured route for some time to come. For large broadcast organisations, in particular, “it is expected that existing technologies such as SDI will continue to be used alongside IP-based networks as the transition to fully ST 2110 infrastructure occurs over time. However, when completely new broadcast installations are created, the trend towards full utilisation of IP media networking is clear.”

The recent development of BBC Wales’ new facility in central Cardiff is a case in point. One 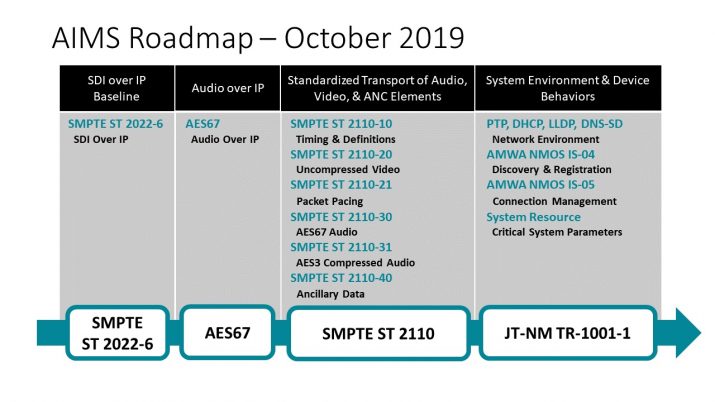 of the first projects of its size and scale in the world, the installation is based around ST 2110, with network switches around the building replacing the traditional SDI matrix and ‘node’ devices interfacing with cameras, monitors and other devices. It is a cornerstone of the BBC’s ongoing push towards IP-based production, and as such has been showcased prominently at industry events during the last 18 months.

Holton noted: “The experiences of the BBC with this major new installation have been shared for the benefit of the whole industry through presentations at recent IP Showcase events, with the latest presentation able to be viewed online at http://vsf.tv/events_archive/2019-09_IBC2019.shtml.”

The importance of education and training in encouraging adoption of audio and video networking is emphasised by Holton – indeed, he remarks that one of AIMS’ primary roles is “to educate the industry about professional media networking and its potential to transform working practices and efficiency. A key aspect of this is the participation by AIMS and its members in the IP Showcase Theatres at recent NAB and IBC shows.”

In recent years, AIMS has also partnered with the Audio Engineering Society on the Audio-over-IP Networking Pavilion at the AES Convention in New York; presentations from the 2019 Pavilion Theatre can be accessed here: https://aimsalliance.org/aoip-pavilion-theater-at-aes-ny-2019/ ). This activity is set to continue at the next event, circumstances permitting: “We are currently making plans to have another pavilion at this October’s convention… assuming the world is back to normal by then.”

Needless to say, these showcases have been rather curbed by the advent of COVID-19. Like many other associations and vendors, however, AIMS is looking to ramp up its web-based efforts during lockdown. “We will be looking to continue providing this sort of valuable education through various online activities in the coming months,” confirmed Holton.

Although IP-based infrastructures for audio and video have increased dramatically in popularity over the last few years, Holton readily acknowledges that implementation of video networking is still at a fairly early stage in global terms. But he is confident that the industry is now on the right path and that the next few years could be hugely productive.

“When it comes to innovation and the adoption of professional media networking solutions, it’s relevant to note that the audio industry already has a rather long history in this field, dating back to the introduction of CobraNet in 1996,” said Holton.

“By comparison, professional video networking is still at a relatively early stage in its development and acceptance, although adoption is now advancing rapidly. Of course, the bandwidth required for professional video can be substantially higher than what is required for audio, but IP networking infrastructures have reached the stage where there is now ample bandwidth for the very highest video quality to be transported.”