As a videographer covering the World Surf League (WSL), Geordie Tarren travels to some of the planet’s most beautiful beaches to document all of the heart-stopping, exhilarating aquatic action. The WSL represents the world’s highest level of professional competitive surfing for men and women. The tour consists of 11 challenging world locations including Hawaii, Tahiti, Fiji, South Africa, California, France, Portugal, Rio and Australia. Tarren most recently completed the Australian leg of the tour, which features competitive surfing on the Gold Coast, iconic Bells Beach and the majestic Margaret River in Western Australia.

In order to capture the challenging imagery of the competitions, Tarren relies on a Miller Air Tripod System to help create the most immersive video experience possible. He was first introduced to Miller tripod systems by cohorts in the Australian corporate film industry when he was involved in camera assisting on projects for major international and domestic brands like Pernod Ricard, Coca Cola and Telstra, Australia’s largest telecommunications and media company. “It was obvious to me from the very beginning that Miller’s tripods were designed and constructed at an exceptionally high standard, and, of course, I wanted one,” he says. “When I found out about the Miller Air Tripod System, I was intrigued and thrilled to be able to get my hands on one.”

Tracking the movements of pro surfing’s elite can be very challenging at times. To create the most enveloping video experience, Tarren finds that shooting with longer super telephoto lenses, up to 800mm, provides the best results. Tarren’s camera of choice is the Panasonic Lumix DMC-GH4, which he attests is well-suited to his style of videography due to its great image quality, internal 4k at 100mbps, 96fps slow motion at 1080p and a highly mobile form factor. 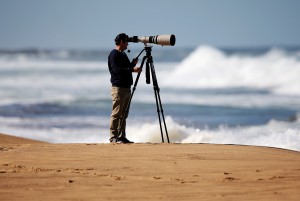 “I like to frame as close up as possible so that the wide shot is rarely used,” he says. “At this extreme focal length, it is essential to own a high quality tripod and that is how the Miller Air Tripod System has taken my footage to the next level. Since shooting with the Air, my work is now being celebrated at the highest possible level. I highly recommend it.”

Tarren’s goal in his work is to use tripod mounted camera movements that are ubiquitous and subtle, and that enhance the connection between the subject and the audience. “The Air Fluid head is ultra smooth for panning and tilting, and since working with this system, I’ve found there to be a vast reduction in stabilization requirements in post production and a greater success rate when shooting in high winds,” he adds.

Overall, the Air Tripod System’s light weight and portable mobility enable it to be the perfect fit for Tarren during his surfing shoots. “It ticks all the boxes for payloads under five kilograms,” he concludes. “It has fantastic stability, portability, ease of movement and a silky smooth fluid head that doesn’t stutter on take-off or halt a camera movement on either axis. It’s perfect for fast moving objects. Additionally, I did a little research and was delighted to discover that the founders of Miller invented the viscosity fluid head, the greatest innovation in tripod history. The Miller Air Tripod System is the result of 60 years of commitment to three legged excellence.”