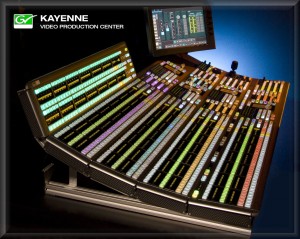 Seeing the exciting potential in 4K/UHD technology and wanting to deliver the very best experience for its viewers, BT Sport looked to key partners including Arena Television to help realise its vision. Arena chose a solution powered almost exclusively by solutions from Grass Valley, consisting of a scalable IP core and broadcast-centric edge devices designed to provide the flexibility and reliability required for live broadcast.

Jamie Hindhaugh, COO, BT Sport said, “This is not our first foray into 4K/UHD, but we needed to build on our experience in season one to move to a standard workflow for season two that would allow us to deliver HD and UHD from the same truck so that all of our viewers, no matter which channel they were watching, would see the same coverage. Arena took on this challenge and they designed the solution that supported this ambition, pushing further by utilising IP infrastructure opportunities. It’s the beginning of a new way of doing business.”

Arena started designing its newest truck, OBX, in 2014 with the goal of leveraging the latest 4K and IP technology from Grass Valley, and in discussions it was agreed that a proven COTS switch from Cisco would provide the ideal IP foundation. Grass Valley solutions powering the completed OBX include 28 LDX 86 Series cameras, four GV Node realtime IP processing and edge routing platforms with 54 KMX-4911 multiviewer cards, 180 Densité IPG-3901 Gateways and a Kayenne K-Frame produciton switcher, all working together to provide a glass-to-glass IP workflow. The Cisco Nexus 9000 series switch and Lawo Virtual Studio Manager round out the integrated package.

“We talked to the usual technology partners that OB firms tend to use and it became apparent that only one company was thinking outside the box in how to move technology forward,” said Arena managing director Richard Yeowart. “The demands of a 4K/UHD signal are much more easily met with an all-IP network, so the emerging 4K/UHD and IP technologies from Grass Valley were an obvious fit for us. What we have now is the most powerful OB solution which provides greater flexibility going forward, is future-proofed and better able to one day roll out HDR and higher frame rates as and when they are required.”

“For us, the biggest advantage was the seamless workflow,” added Hindhaugh. “We didn’t have to do anything different on our end to reap the benefits of the 4K/UHD and IP technology. This is clearly the right direction for the industry, making it possible for us to provide both HD and 4K/UHD content in parallel for our viewers so they can choose what’s right for them at the time,” he added.

By offering direct IP interfaces on all of these products, Grass Valley makes it easier to move the data across the network and realise the inherent benefits of IP while delivering on the demands of live production. The LDX 86 camera, from a family of cameras with a reputation for unmatched quality, offers the ability to capture native 4K and native 3G/HD on the same device, utilising TICO compression to deliver a signal across a single wire and reduce the physical cabling requirements. OBX is completely signal-agnostic, offering the ability to switch easily between UHD 2160p50, 3G 1080p50 and HD 1080i50, while using less cable for a total weight that is lower than an equivalent SDI installation.

“All eyes were on this project because of the ambitious nature of the requirements,” noted Marco Lopez, president, Grass Valley. “From the beginning, we knew that working with the right partners and embracing the standards-based advantages of interoperability provided by IP technology would be critical to the success of the project. In talking with Arena, we determined that we needed an IP setup based on the latest standards and 4K/UHD devices with the ability to produce HD and UHD in parallel with opportunity to support HDR in the future. And of course, we had to be mindful of the cabling and weight requirements as well as the overall cost.”

The broadcast was extremely successful. More all-IP and 4K/UHD projects are on the immediate horizon for this truck, and two more trucks are in construction with the same design. When OBY and OBZ hit the road in the coming months, Arena will be even better equipped to maximise the latest technology and provide its clients with more live production flexibility than ever before.