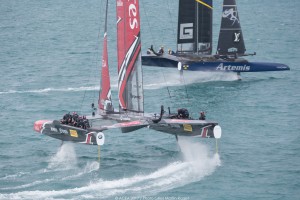 The 35th America’s Cup is underway in Bermuda and, once again, the America’s Cup Event Authority is manning the ACTV host broadcast duties for the prestigious match race.

With a history that dates back to 1851 – predating the modern Olympic Games – the America’s Cup has seen many changes over its long life; most recently, the introduction of the much faster AC72 wing-sail catamarans in 2013 (50-ft. catamarans are being used in 2017). At that 2013 race, which was contested in San Francisco, ACEA looked to reflect the changing racing style with a fresh take on the ACTV television broadcast. Thus, AC LiveLine was born.

AC LiveLine, developed by Stan Honey and Sportvision (now a division of SMT), overlays geo-positioned virtual lines and data streams onto the live helicopter feed, which enables ACEA to show the boundary of the course and where the yachts are in relation to one another.

“One of the things that’s always been a challenge in yacht racing is to know where the boats are on the race course — who’s leading, who isn’t leading,” says Executive Producer Denis Harvey. “You don’t have a field of play like a stadium, you don’t know where the boundaries are because your cameras aren’t in fixed positions and moving around. It’s very hard to tell who’s ahead and who’s behind.”

For the 2017 race, ACEA has added commercial ad insertion opportunities around the course, creating a virtual billboard for sponsor logos. Real-time biometric data, like competitor heart rates, will also be collected for the first time and added to the television broadcast. And external factors that affect the race, like wind speed, will continue to be monitored and shown on screen. However, Harvey is careful not to overwhelm the viewer with too much information.

“The key thing for me always is how does it tell the story?” says Harvey. “If we use a piece of data, what is it telling the viewer to enhance their understanding? My motto is always we only add a graphic or an element if it improves the storytelling. There’s no point in putting up a graphic just for graphics’ sake.”

ACEA is deploying two helicopters with gyro-stabilised cameras, cameras on the chase boat and on a drone, and eight cameras on both of the competing yachts: four fully agile PTZ cameras, three super wide angle POV cameras (one under the dashboard and one on either side of the hull), and – new this year — a ‘parrot cam’ on the shoulder of the helmsman. ACEA is able to take four video paths off each boat at once, and an additional drone boat will communicate with a nanotransmitter on the drone and relay its signal back to shore.

Unlike in San Francisco, where ACEA built an entire control room and production infrastructure inside Pier 23, the host broadcaster opted to ship an NEP mobile unit from Sweden to Bermuda. The helicopters were shipped in from Chicago.

“There’s very limited broadcast infrastructure in Bermuda,” explains Harvey. “If you’re in a city like San Francisco, you can [rely] on local facilities. Here, everything had to be brought in. We’re using standard broadcast facilities [for the 2017 America’s Cup], but we just have to ship them to Bermuda and ship them back afterwards.”

Harvey’s team began work on the 35th America’s Cup approximately one year after the conclusion of the 34th, and Harvey himself has been on site in Bermuda since April to prepare for the race. The team is responsible for the production and distribution of the America’s Cup television broadcast. While some broadcasters, like NBC Sports and BT Sport, opt to have their own on-site presence, others have the option of taking ACEA’s feed, which includes optional commentary, and playing it as is on their respective networks.

“We’re particularly proud of how we are able to capture [the race] and turn that into a what is now a pretty attractive television programme for the viewer,” says Harvey. “With the graphics, with the cameras, with the audio, we’ve made it a really exciting and enjoyable television-watching experience for people who probably aren’t sailors. Now, you can sit down and put your feet up on the couch and you can know nothing about sailing and you can watch it, understand it, and enjoy it.”