Christophe Arrivé: «Most of the cameras on the Prix are portable and wireless»

The queen of all equestrian competitions watched by a billion viewers around the world fulfilled its promise on delivering drama, as British horse Goldern Horn beat favourite Treve, the winner of the last two Arc de Triomphe races, during the first weekend of October at Longchamp in Paris. For AMP Visual TV, however, this was business as usual as it was the 15th time in a row that it has provided OB services for clients France Galop and the GTHP (Groupement Technique des Hyppodromes Parisiens).

AMP Visual TV MD Christophe Arrivé has covered the event for France Galop right from the start and is the company’s main man when it comes to horse racing. «I started off as a sound engineer on the Arc de Triomphe and then became production director before moving on to even more senior roles. I feel passionately about this competition as I have been involved with it from Day 1 and seen our coverage evolve over the years. In the beginning is was a fairly intimate and low-key affair but it has morphed into a huge event as more and more broadcasters around the world want images of the Prix,» he said.

Considered as one of the most important horse races in the world, the Prix gained in prestige when Qatar, through The Qatar Racing and Equestrian Club, became a sponsor of the competition in 2008, a deal which France Galop has recently renewed for ten years. The prize money certainly reflects the Prix’s grandeur: since the Gulf State became involved, it has surged from Euro 2 million to a whopping Euro 5 million, the highest reward ever for any horse race. It is also one of the longest: the horses run over a 2400 metre distance at speeds which can reach 68 Km/hour.

Eight OB vans were dispatched on site, in all shapes and forms. «We practically use our whole fleet on this competition. We provide one Millenium Signature van, which transmits the international signal, two Millenium trucks for local broadcasters France Télévisions and Equidia, a couple of Optimum smaller compact trucks for the programme broadcast on big screens inside the hyppodrome, a couple of IXI lightweight production units for satellite transmissions, most notably of Qatari TV channel Al Rayyan, as well as one Extender 4 van which is used to receive all the wireless HF signals,» he said.

Equipped with technology from EVS (XT3 6-channel servers), Studer (Vista 8) and Grass Valley (Kayenne XL), the Millenium Signature is AMP’s prestige unit, measuring 16.5 metres in length and 5.20 metres in width. It can be equipped with 30 cameras, which is precisely the number used on the Qatar Prix de L’Arc de Triomphe. «Most of the cameras on the Prix are portable and wireless. We also have a couple of i-Movix X-10 cameras, which provide ultra slow-mo images. They are portable but on the Prix de l’Arc de Triomphe, they are fixed to the ground. They provide great replay images as well as valuable information for analysts,» Arrivé said.

One of the peculiarities of horse races compared with other sporting events is the nature of the viewing public. «You have to cater for several different audiences: the general public, of course, but also the punters, the trainers and horse owners, and all the other specialists involved,» he added. This means that the race has to be understandable for the general public but also that the images have to be precise enough to satisfy what one could describe as a particularly demanding B to B audience.

«We provide some on-air programme dressing to make things more understandable for the general public. We have included several virtual lines which do not exist on the ground, because it gives viewers an indication of how much of the race still has to be run. These virtual markers are placed at 50, 100, 200, 300 and 400 metres from the finishing post,» he said.

On the cards for next year’s race is a virtual record line, so that the horses’ performance can be compared with previous years’ champions. 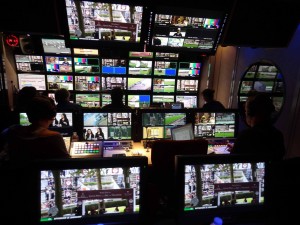 AMP Visual TV also installed a ‘paluche’ wireless mini-cam system inside the starting blocks. «It is our own technology, we have adapted it from existing Kapa mini-cams. We are working on it to offer better quality images and higher resolution, a technology which should become available during the early months of next year,» he indicated. Around six cameras are facing the jockeys inside the boxes, and another one of them was set up to get a profile view of all the jockeys lining up before the off.

Preparation for the event started approximately a week before the actual competition. AMP Visual TV relied on a team of 80 to 90 technicians, who responded to four different chief engineers: head of production, head of audio, head of wireless and head of video, who worked hand in hand with France Galop’s TV director Christian Alba. «We find that set-up works for us, it makes the whole process flow easily,» Arrivé said.

What’s in line for the future ?

4K is obviously high on the agenda. The company has announced that it is planning to fully equip a new 4K van, which should become available during the first six months of 2016 and it already organised a 4K test during last year’s Prix. But in the perhaps slightly longer term, AMP Visual TV is preparing for multi-device delivery, if the right holders agree to it. «There is a real demand for it: punters are really keen to access images of the race from their smartphones,» he said.

Another likely technology development, according to Christophe Arrivé, is remote control rooms. «This won’t happen on a race like Le Qatar Prix de l’Arc de Triomphe, but there are at least 450 horse races which take place in France every year, more competitions than there are days of the year. So remote coverage does make sense for some of them in the long term.»

The trend in using less equipment is not a new one and has been increasing since the massive adoption of fibre optic cables for transmission, which according to Arrivé, have really been put to full use over the last couple of years. Not only did it make HD technology ubiquitous (all the cameras on the Qatar Prix are HD), it also helped to rationalise the transmission process.

«We use only one van and one relay antenna for reception of all the wireless signals. That has significantly reduced the costs of OB coverage, especially in terms of the number of technicians required on-site. Now we only have one person overseeing the reception of the signal for the whole set-up, whereas before there was one person per truck,» Arrivé said.

Reducing costs at one end but perfecting the highest delivery technology at the other: dilemnas broadcasters around the world are increasingly faced with and service providers like AMP have long understood.