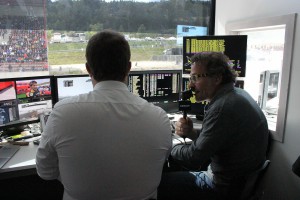 Last year the French pay TV channel obtained the rights to broadcast the Formula One race for three seasons. “Just as we do for other sports, we absolutely wanted to enhance the international feed provided by Formula One Management by proposing a true immersive experience to our subscribers,” says François-Charles Bideaux, director of sports production for Canal+.

As the TV rights agreement with the FOM was only finalised six weeks before the start of the season, Canal+ had to break speed records in order to set up the editorial choices (the programmes, the teams) and, most of all, the technical facilities that were necessary.

“We rapidly launched a request for proposals and a call for tender. All the offers we received were interesting but AMVISUAL TV made the difference with its comprehensive approach, no doubt thanks to its experience in motor sports,” continues Bideaux.

For every Grand Prix event, no less than three-and-a-half tons of broadcasting and technical equipment are transported in containers for the races outside Europe. For the races taking place in Europe, a truck specially designed by AMP VISUAL TV is deployed.

“Weight and cost restrictions have prompted us to create tailor-made and novel all-encompassing solutions in order to meet the needs of Canal+.  We have developed an optimised flyaway kit that is both lighter and has an improved modular system,” points out Gilles Sallé, CEO of AMP VISUAL TV.

Inside the Extender 2 truck that was present at the Spa Francorchamps Grand Prix circuit, all the usual equipment used at the championship events could be found, ie. a Sony MVS 3000 production switcher, a multi-monitor display, two JVC 46’’ LCD TVs and an ISIS server. All the equipment was optic-fibre connected, which significantly reduced the overall weight. The internal intercom system was directly connected to the Canal+ headquarters.

Video editors and journalists used two Avid Media Composer stations with After Effects to edit the coverage. The best shots were selected from the EVS LSMs and also from video recordings via the Hyperdeck systems of the nine on-board cameras.

The cornerstone of this setup, and no doubt AMP VISUAL TV’s great strength, lies in its RF solutions. In fact, considering the distances between the paddock, stands and production control room, as well as the numerous shadow areas and interferences, it was absolutely necessary to ensure the security of the whole system. The three Sony HDC 1500 cameras in use had a dual-channel RF link receiver. Five relay antennas situated close to the paddock, a further four among the stands and receive points on a crane made the signal transmissions possible.

From now on, the Formula One programme that is aired unscrambled shortly after the end of the race will be produced on-site for all the races. The production studio can be installed with the same technical set-up and, in less than an hour, so can the teams’ hospitality rooms.