SVG Europe sat down with the Sport Mediaset team in charge of the Formula E Championship – director Alberto Brandi, producer Fabio Pravettoni and production manager Filippo Molinari. We discussed how the Sport Mediaset team produces the TV coverage for the electric car E-Prix races and what technologies are employed along the way.

As director of Sport Mediaset, can you give us a description of this emerging sport, where it takes place, how many events it includes and if Mediaset follows all the races?

Alberto Brandi: “The Formula E World Championship has reached its fifth edition. It is the first, however, with second-generation cars that have greater speed and autonomy. In fact, this year the races have no breaks, whereas last year the races were divided in two parts. 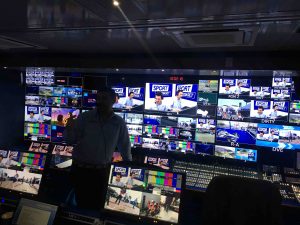 “The season started on 15 December in Ryad and will close on 13 and 14 July with the New York races, for a total of 13 E-Prix competitions. This year our presence from venues is extended compared to the previous season: we are present with our maximum coverage in 9 out of 13 events.

“The main efforts are directed towards the Rome competition on 13 April which last year was an incredible success: the average share was more than 9%, a figure above all expectations and which we will try to surpass. Returning to external coverage, we will still be present at all stages with at least with one correspondent.”

How many professionals do you usually engage in the production of a competition, both in terms of editorial and technical teams?

Alberto Brandi: “The journalistic team is led by Luca Budel. In the races that we follow from the venue we send Irene Saderini, conductor; Ronny Mengo, conductor/reporter; Anna Capella, reporter; Nicola Villani, commentator; and Fabiano Vandone, technical commentator. The producer in charge is Fabio Pravettoni, flanked by Annamaria Pagnini and Christian Scarpina. The production manager is Filippo Molinari.”

Where are the E-Prix races broadcast on air and on what schedule?

Alberto Brandi: “The reference television network is Italy 1, and the timetable varies from time to time depending on the city where the E-Prix is run. For European events, the departure is set between 16 and 18 hours. Overseas we start in the evening and in the East in the morning.

We are planning retransmissions in the afternoon for the E-Prix broadcast in the morning. Everything is also visible streaming on our website Sportmediaset.it, where you can review all the races on demand.”

For many TV productions, Mediaset uses proprietary vehicles, while on other occasions the choice is specialised external services. What happens in this case?

Fabio Pravettoni: “The director is always Andrea Miglio and the shots are similar to those typical of automobile circuits. In the four races that we follow from Cologno, the production is with our own facilities. We are present with four broadcast vehicles. In total, in the Formula E official TV compound includes the host broadcaster and the other TVs for about 40 international vehicles.

Are links to final broadcast via satellite and/or fibre optic? Who deals with uplink connections? “

Filippo Molinari: “Connections are made by satellite. The uplink is managed by the different contract suppliers with EiTowers, the Mediaset group company that deals with telecommunications.

“The host is curated by FEO TV, the English organisation in charge of the official production of the Formula E which realises the clean feed. Our TV production vehicle that we bring to the site is an integration/unilateral OB van.

“An some stages, where we foresee a complex unilateral, we use the 4k OB4 gallery by NVP, a 14- 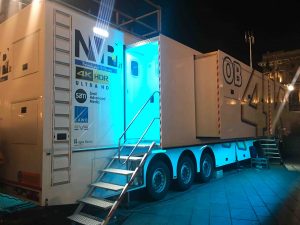 metre triple-expansion truck that allows you to work comfortably in a space of up to six meters in width. It is a very powerful vehicle that manages up to 28 Grass Valley LDX86N 4K Native cameras; on board it carries the Snell Kahuna Sam 9600 IP-3G Format Fusion 4 Video Mixer with management control and conversion UHD-HDR-SDR.

“We produce a programme in stereo that is converted into Dolby 2.0 from our emissions in Cologno. Radio microphones and audio technicians belong to the RTI production centre. We use Wysicom radio systems.”

How many cameras are usually located on the circuits and do the numbers vary depending on the location?”

Filippo Molinari: “From race to race we decide on the number of TV cameras, obviously depending on the importance of the event. The minimum coverage includes six cameras of which four are radio cameras directly on the circuit and two wired and remote cameras useful for commentators. The cameras are all by Grass Valley.”

How long does it take for each setup before each race and can you count on the presence of pre-wired fibres on the circuits?

Filippo Molinari: “Since the circuits are based in city centres, there is no fibre pre-wiring. This is provided by our TV service during the set-up phases for the radio cameras and radio microphones. The set-up usually starts on Wednesday morning to be ready for live on Saturday morning. 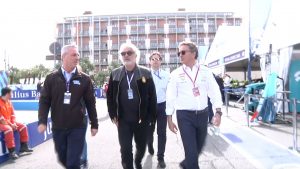 “To make highlights and stories we use 6-channel EVS systems and NLE editing systems with Final Cut. We use HD and 4K systems, but we always finalise the product in full HD. HDR is not yet present in Mediaset broadcasts. We produce a feed for the links and for the live broadcast of the programme. The host broadcaster passes us two more multilateral feeds that we need as a backup.”

“Our radio cameras in the field are all manually operated. The cameras in the two commentary booths are wired and remotely operated. We sometimes use action cameras positioned on-board the electric cars – but only for the presentation services of the track. During live we use the iso signals of the host that come from the various on-board cameras and also wirecam, an aerial camera remotely operated on steel cables 400 meters long drawn between two cranes.

“For pre- and post-race graphics we use a workstation on board in the gallery. The graphics of the race are instead generated directly by the host broadcaster.”