An exploration of VR and AR for sports: part II – is VR a long-term opportunity or short term fad? 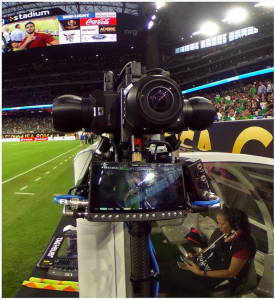 Interest in live VR is increasing all the time, says 360 Designs.

Does VR in sport have a future? We’ve seen [in Part 1] that production companies and technology providers are recognising the considerable challenges of VR and mixed reality video in sports coverage. Despite all the trials going on, some of them involving major fixtures and events, there’s still a sense of ‘trying the water’.

“Everyone is trialling,” says Gilles Mas, managing director of Deltatre’s International Football Unit. “No-one is injecting huge amount of money. The VR industry is putting money into the headsets, controllers and so on but everyone is being very cautious. The [broadcast] industry has learned from the 3D hype and collapse, and is wondering if VR is going to be any different.”

“The main interest is coming from sports federations, rights owners and broadcast rights holders,” agrees Mark Grinyer, head of business development, for 3D, 4K & Sports, Sony Professional Europe. “They are most interested in how to engage the consumers of tomorrow and how best to use the vast amounts of content and data they have. They want to know the most effective ways to use VR to future-proof their business in today’s competitive media industry.”

“[VR and mixed reality] offers a chance to engage with sports fans of the future and tap into a new audience demographic – those who don’t, and aren’t used to, consuming content from the traditional television set.”

“There is a generational change occurring,” he adds. “The consumers of tomorrow are the social networking and gaming generation. To access these new consumers, broadcasters must offer them content on the devices they use. Many of those new consumers are PlayStation users, with VR gaming capability, so Sony is working to open up VR content delivery options for rights holders/owners so they can talk directly to new consumers.”

“Brands and broadcasters are on board and should absolutely continue to invest, test and develop,” says Rewind founder and CEO Sol Rogers. “Great content will create demand for HMDs, driving industry growth. But while distribution is limited, many brands are questioning reach and ROI, which limits the amount of content made. It’s a bit of a chicken and egg situation.”

Michael Boreham, senior market analyst with Futuresource Consulting feels monetisation of VR sports events can develop in a number of ways. “Pay per view events and season pass subscriptions are both tried and tested methods in traditional sports broadcasting, and are likely to be utilised in VR in addition to ad-funded broadcasts. Dependent on rights, sports clubs may also seek to monetise rights directly by selling virtual stadium tickets to complement ticket admission revenues.”
“VR headsets can give the user a court-side seat view or the ability to view the action from 360 degrees,” agrees Rogers. “The opportunity to place a VR rig in [an exclusive] seat, and then sell it thousands of times over has inevitably piqued promoters’ interest. Plus VR sport is comparatively cheap to produce as you’re not creating new realities or new ways of shooting, you basically install a camera rig as appropriate.”

360 Designs is one of the companies providing such rigs, and CEO Alx Klive says there are many people currently asking about live VR. “Clients are realising that VR and live VR represents a once-in-a-lifetime opportunity, a new medium that is able to reach every person on the planet via their phones,” he says. “When those phones have 8K or 16K screens, it will be game changing – teleportation by another name. We think people will pay for teleportation type experiences, certainly once display technology improves a generation or two. Viewers will have an immersive and vastly improved experience, blending the experience of actually ‘being there’, with commentary, analysis and all the features and replays that TV offers.”

“The industry and applications of VR are definitely still young and there is so much more to achieve,” admits Samuel Westberg, director of sales EMEA for LiveLike. “But if I had to put my finger on one thing that would help bring the combination of VR and sports even more into the public eye, it would have to be sustained content. Up until now, most VR sports content has been irregularly scheduled, but when someone can nail down the art of week-over-week content in VR, I believe we’ll see a shift in public perception and an increase in overall engagement and adoption of the technology.” 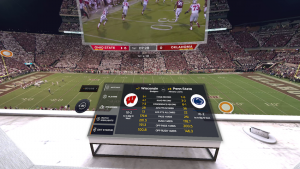 “If there’s a certain degree of activation around a sport, there’s a perfect opportunity for virtual reality,” says Rory Byrne, VR/AR client director at Happy Finish, which has created virtual experiences for cricket and rugby customers. “You can have fan zones where fans can come and experience something, like a seat they would normally never be able to get to, or they might be able to train with the team, or they’d be able to experience what a boxer experiences, or be on the field.”

“The paradigm of both VR and AR is very different from passive 3D where you put some glasses on and you’re just watching TV,” says Mas. “There’s a lot of interactivity and enrichment of the game.”

He continues: “People are saying one of the problems with VR right now is that you’re trapped in your headset, it’s a one-to-one experience, and you’re watching the game on your own. They say this will be the death of VR, I would challenge that. In a lot of households, one person is [already] watching the football on their own. I think this is the natural [VR consumer]. The headset will become smaller, less invasive, and people will get more comfortable with enjoying that experience.”

“We’re trying to bring a social element into it,” he adds. “LikeLive is working on that and we’re collaborating with them. So if you are watching your VR game in your headset, you can connect to all your buddies sitting on a virtual couch, and you can talk to them via audio chat available through the headset. So you’re transcending [existing] limitations by opening new ways of connecting remotely with people around the game. I think this will have value.”

“We’re focused on providing high quality immersive experiences that can be adjusted to reflect the content,” says Sony’s Grinyer. “For live coverage, we combine 180° live content with other content sources, data feeds, social media and rights owner/rights holder branding. This provides an environment that enables full engagement with the event and friends, removing the need to take off the headset.”

DaveElliott, enterprise business development manager at Holovis, feels that in order to truly immerse people into a virtual sporting world we need to think beyond just the visual and bring in immersion of the other senses too.

“Spatial audio, perfectly synched motion and SFX such as wind can allow us to create things like extreme sport simulators,” he says. “For example, the thrill of the skeleton, the skills of snowboarding, or the intensity of ice canoeing can all be experienced and mastered without the high entry costs, the physical danger [and other barriers to real world participation].”

Gilles Mas says Delatre is looking at producing games in VR using live feeds and post-produced 360° content, transporting and distributing it through the cloud. And he sees future technology operating even more as a hybrid of AR and VR. “You are going to switch between augmented or virtual immersion,” he explains. “You might want to watch the game with some glasses, and have the game stats in realtime displayed as overlays. But at some point you might decide you want to watch a re-run and flip into a fully immersive game. And I think we will see devices in the future that can play in both contexts. I think that people like Samsung and Apple, those more at the consumer level, will definitely be drivers of the adoption of that mutant AR/VR model. We’ll have that in five years, without a doubt.”