When the NHL announced last month that it had selected SMT (SportsMEDIA Technology) to deliver its new puck- and player-tracking system, it marked a major step forward in what has been a long odyssey for the league. With the season now under way, NHL and SMT efforts are in full swing with plans to have the system installed in 22 arenas before the New Year and available for every single NHL Stanley Cup Playoffs game come April.

The system will be installed and fully functional in all 31 arenas when the puck drops on the 2020-21 season.

“I’m happy to say that we are on schedule,” said NHL CTO Peter DelGiacco. “There’s a team of 20 people, and we all have a shared vision. So I’m confident that we will be able to deliver a system that’s going to have a major impact on the way people consume hockey.” 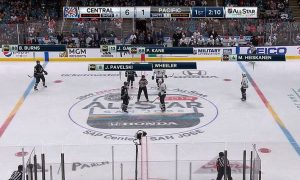 SMT has been tapped to provide the full development and implementation of puck and player tracking, as well as handling data integration, distribution, and virtual-graphics generation. The NHL’s deal with SMT comes after it broke off its partnership with its previous tracking-technology partner on the project Jogmo World Corp., which was battling financial issues, in September. However, with SMT in tow, the league remains on schedule to launch the system in time for the Playoffs in April.

“We’re going to generate an incredible amount of new data that has never existed before and use it to create new and enhanced experiences for everyone in the NHL community, starting with our broadcast partners,” said Dave Lehanski, SVP, business development and innovation, NHL. “We believe that we are now positioned to take a massive step forward with regard to the way that the NHL game is presented and consumed.”

A Challenge and an opportunity: Tracking a sport unlike any other

SMT is already entrenched in the NHL’s technical backbone, having designed and operated the league’s HITS (Hockey Information and Tracking System) official scoring system, as well as providing high-end graphics packages for the league’s primary broadcasters, including NBC in the US. The company also provided the broadcast graphics and data overlays used during an introductory trial run of the system at last season’s All-Star Game in San Jose, CA.

However, a comprehensive tracking system represents a significant challenge for the game of hockey. Unlike the other major US leagues, hockey is the only team sport in which players enter and exit the field of play without a break in the game. In addition, hockey games feature nearly constant action throughout 60 minutes of gameplay — unlike an NFL game, which averages less than 15 minutes of gameplay during a three-hour game window.

“There’s an insane amount of variability in our game broadcasts,” said Lehanski. “It was clear to us from the beginning that, if we wanted to tell some of these other, deeper stories about the game, it would need to occur in real time and would have to happen while the game is taking place.”

In addition, the league is keenly aware of the multitude of opportunities this system will create beyond just game broadcasts. The NHL plans to use the data for new metrics to power content on NHL digital platforms (including, potentially, betting outlets in the future), as well as coaching and scouting applications.

“We will now have the data to drastically enhance the experience of everyone in the NHL community,” added Lehanski. “Obviously, we’re focused on our broadcasters right now, but, of course, there’s a number of direct-to-fan opportunities: [such as] betting applications, free-to-play games, and fantasy. And then, of course, we’re thinking about our coaches and our general managers through applications that we’re going to build or further enhance in our integrated coaching system.”

How it works: OASIS at the centre of it all

Once installed in all 31 arenas, the tracking system will gather the data for every single game, generating nearly 1 million 3D coordinates/data points over the course of a single regulation game.

In addition to continuing to provide the HITS scoring system, SMT’s OASIS Platform is driving the ingest, aggregation, and distribution of data from all games. OASIS acts as a meeting point for the tracking data, HITS, the official clock, and score. OASIS also features an artificial-intelligence (AI) engine, which can calculate in real time all the events taking place on the ice.

Broadcasters will have access to a wealth of data (as NBC Sports did at the 2019 NHL All-Star Game) once the tracking system launches for the 2020 Stanley Cup Playoffs.

“OASIS organises a league’s data and video ecosystem as Level Zero, Level One, Level Two [systems],” SMT CEO/founder Gerard J. Hall explained. “Level Zero is any system that creates data and or video, including the puck- and player–tracking system, the HITS official scoring system, any video from cameras.

“The output of those systems feeds into Level One of the OASIS Platform, where they are all synchronised to a common timecode. Level One also provides an artificial-intelligence engine that infers all sorts of additional events automatically. The data and video that is combined and synchronized at Level One is then available for real-time push and pull via APIs to all Level Two systems and Level Two consumers of the Level One combined data and video: for example, broadcasters, teams, coaches, social media, and NHL partners.”

All about OPTICS: How tracking data will impact the broadcast
SMT is also providing the SMT OPTICS system to integrate the puck and player tracking data into NHL broadcasts. OASIS’s AI engine can detect real-time events (such as face-offs, penalties, and goals) and automatically trigger the OPTICS system to provide virtual graphics within the broadcast (for example, player ID pointers and puck/player trails), as well as dropdown graphics in the mini scorebug graphic.

“OPTICS provides a variety of virtual and enhanced storytelling tools — live, in instant replay, and in packaged replays — to the broadcasters,” said Hall. “OPTICS will be fully integrated into the scorebug [graphic], so it can automatically trigger dropdowns to show dynamic changes in game status: for example, who is on the ice or who just came on the ice. The game is so fast that, when cameras are in one zone following the puck and there’s a line change out of frame, the viewer has no idea it took place. OASIS’s AI monitoring of puck and player data instantly alerts OPTICS, which can then automatically trigger the scorebug to show those changes.”

In addition, SMT OPTICS will provide puck and player tracking data directly to announcers, enabling them to analyse and interact with the data even if it’s not on-air.

Broadcasters on board: Bringing player tracking to the masses
According to Hall, the SMT OPTICS system installed at each arena will be fully integrated with each NHL broadcaster, so that each production team’s scorebug, CG interfaces, and virtual-graphics systems have direct access to player tracking data. The graphics producer inside the production truck will be able to deploy these graphics and AR elements in the broadcast with the click of a button using a simple, single-screen UI rather than having to learn a sophisticated virtual-graphics system.

SMT’s OPTICS system will be supplied to both the NHL’s national broadcast partners — NBC Sports in the US, Rogers in Canada — and several RSN rightsholders immediately on launch.

“One of the primary design parameters given to SMT by the NHL was to make sure that every one of their broadcast partners would have the ability to exploit the data visually within their broadcast for the benefit of all the fans, not just the [national] broadcasters,” said Hall. “SMT’s OPTICS solution gives all the NHL broadcasters the tools, not just data, to tell better stories. I think several of the other leagues have [installed player-tracking systems] and provided the [raw] data to broadcasters and let them figure it out. But the NHL has decided to make an investment up-front in OPTICS to make sure not only that the data is delivered to the broadcasters but also [that they have] the necessary toolkits to use the data fully.”

To integrate and ensure that the new system fully meets broadcaster needs, the league and SMT have been working closely with NBC and Rogers to conduct tests and develop the final product.

“We wanted to make sure we involved the heavy users of this data — primarily, NBC and Rogers, as well as our regional partners — from a very early stage to make sure that we were clearly aware of what their objectives and potential use cases would be,” said Lehanski. “We’re not there yet, and there’s still more testing to be done. But we wanted to be able to put our best foot forward the day the system was available so everyone was able to use it and gain value from it as quickly as possible.”

Looking ahead: Much more evolution on the horizon
SMT’s puck- and player-tracking system, OASIS Platform, and OPTICS System are already installed in two arenas, and SMT and the NHL plan to have 22 venues on board by the end of December. The  SMT systems will be installed in every potential playoff contender’s facility prior to the start of the Playoffs, and the league has identified a handful of regular-season games to test the SMT systems prior to postseason.

“Broadcast is very important to us so that will be the primary focus to start,” said DelGiacco. “It’s going to take time to roll this out fully, and the product is going to mature over the next couple years to provide more services for the different users. Once this data becomes available, there’s a lot of work that needs to be done by the various groups in order to leverage it to produce the applications that they need. And my guess is that, once they get this data and start using it, they are going to ask a whole different set of questions in year two.”

DelGiacco noted that even the data being collected will evolve over time as the league derives new kinds of information and creates new statistical categories based on the information collected.

“It’s an exciting time to be covering hockey,” he said, “because the amount of information that we are going to have will allow us to tell some really great stories and give the fans the ability to get some really great insight into what’s actually going on in the game. I think it’s going to give us the ability to showcase how exciting the game truly is on a much deeper and more interesting level.”

SVG Director of Digital Brandon Costa contributed to this article.