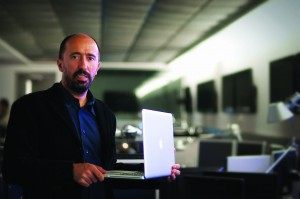 For fan ‘engagement’ read ‘monetisation’. Broadcast and digital sports services company Deltatre has set its sights on the huge market potential for digital fan engagement services at federation, league and club level. Speaking about its recently announced official partnership with second screen sports specialist Netco, Deltatre’s Chief Product Officer, Carlo de Marchis said, “The question is no longer about whether to be connected with fans digitally but about how you do it. Increasingly it is about linking demand for engagement by fans with monetisation.”

Netco and Delatre united to deliver a white label web player and mobile app as part of a suite of digital services organised by HBS for rightsholding broadcasters around the 2014 FIFA World Cup. They will now work to offer a similar set of services to the market including websites, mobile apps, multi-platform live and on-demand video experiences, social fan engagement and in-stadium activation.

In particular it will marry Netco’s front-end app development with Deltatre’s back-end CMS (Content Management System) and its Diva video platform. The partnership is strategic only with no exchange of equity. The services are largely aimed at viewer/fan second screens although Netco has plans to cast apps direct to connected TVs later this year.

The pair have already inked a deal to provide digital services for a major soccer event although Deltatre would prefer not to disclose details at this stage for contractual reasons.

“More and more top clubs are becoming media companies,” said de Marchis. “They have some rights to content while their brand sponsors usually have very limited content rights yet they need content to extend the reach of their brand to the club’s global fanbase. Many of the top clubs [he cites Bayern Munich, Manchester United and Barcelona] are already monetising by digital. Their fans are customers. They have e-commerce embedded in their digital strategy in a far greater way than sports organisations like Olympics, FIFA or UEFA.”

He added: “The good thing about clubs is that they are very diverse entities, each with a different story. There are things that you can do with digital to make the whole experience of being in a stadium frictionless. From buying food to finding your seat. Growth in digital is potentially very high. More and more club revenues will be earned by a combination of physical [merchandise/sponsorship] and digital experiences in the stadium, on the move and at home.”

What neither Netco or Deltatre is providing, however, is the communications hardware inside the stadia. While many clubs are pursuing a Wi-Fi route, de Marchis is not convinced this this is necessarily the answer.

“Wi-Fi is challenging to install, very complex and expensive,” he says. “A year ago clubs were investing in solutions such as Cisco’s connected suite of in-stadia products but now we see more clubs talking with telco operators about how 4G LTE may be the way forward. It may be that 4G LTE networks could deliver connectivity in a stadium of 40,000 people in a far more elegant, simpler way. That, said, both options are still on the table for us.”

He added: “We are waiting to see which way the market is going. Will it be Wi-Fi or will LTE develop into the most widely used and appropriate solution?” LTE Broadcast, the multi-cast layer to LTE — which is being tested at various sports stadia by telcos — is being observed with interest by Deltatre.

Initially the partnership with Netco is focused on football but could address other sports. Netco works with clients in tennis, auto-sport, rugby among others. For example, De Marchis feels that athletics could benefit from interactive on-demand video for fans attending an athletics meet.

“If I’m in a stadium with multiple events happening in the bowl I would like to be able to see the close-up of action on the long jump track on my mobile device at the same time as viewing a wider field of view. In football, the production of video content is different. You would perhaps only stream replays of the most contentious decisions.”

Deltatre is also pledging to adopt a more open business strategy over the next five years. “Since we launched in 1986 we have mostly done things ourselves,” said De Marchis. “To move to the next level of growth we will be more open to partnerships. We will try to talk with every company that makes sense to us and especially those who share the same passion for sport.”

The alliance could be beneficial in helping both parties reach wider markets. From Deltatre’s point of view this means South East Asia and France. Netco is headquartered in Paris and has an operation in Sydney. De Marchis says Deltatre has global footprint in Europe, UK and US, with growing presence in India and South East Asia.

It developed the second screen app for BeIN Sports in France, US, Middle East and North Africa; and a bespoke app for the Stade de France which integrated a purchasing platform to purchase tickets and access practical information on the best way to get to the ground.

Netco devised the second screen app for the FIA WEC endurance racing season in partnership with AMP Visual TV and using EVS’s C-Cast technology. This offers fans several direct streams, including from the driver’s cockpit, pinpoint locations of every car around the track and interactive track map.

Last month it launched a bespoke app for the Vincennes Hippodrome in Paris which works as on-the go access to all stats and history about runners and riders and in a second format only accessible within the racecourse. This version provides additional features, including the ability for users to watch race video replays selecting different cameras and unique angles (such as a overhead WireCam), as well as review all past races.

Beacons deployed in the Hippodrome interact with the app and will enable the venue managers to analyse spectators flows, send personalised content and one-to-one marketing based on identification of places most visited in the Hippodrome and time spent there possibly linked to register personal information.

The mobile experience is also linked to fixed-screens in the Hippodrome. Fans can ‘like’ their preferred horse; the results of the vote will be displayed on a giant screen. A stats centre with graphical data will help newcomers and more experienced visitors better understand the race. A part of the app dubbed Fotofan assists visitors to take pictures, add graphical elements to personalise it and upload it to social media.