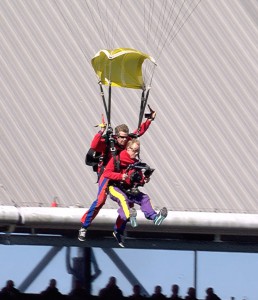 The cameraman, Ben De Graaf, flew into the stadium in a tandem parachute rig

The Feyenoord v PSV match on Sunday 23 March opened with a truly spectacular parachute shot that became a tour around the pitch following the players as they emerged from the tunnel, lined up and shook hands, went in to the team huddle, and then got into position for the kick off — all in one continuous shot. It is just one of the innovations that Fox Sports Netherlands has introduced recently to liven up its football presentation, including turning its studio into a window on the stadium with ChyronHego’s VistaCam and trialling Epsio Paint, a low-cost telestrator application from EVS.

Fox Sports had previously done a one-take, continuous opening shot late last year at a Feyenoord v Ajax game, where the cameraman, Ben De Graaf, used a Canon C300 with Tokina 11-16mm lens and a Freefly MoVI M10 stabilised rig to follow the teams out of the tunnel, through to the coin toss, the huddle, and then finished by following the goalkeeper as he took up his position, with a sweeping shot right around the goal, lasting several minutes. The shot couldn’t be rehearsed, but De Graaf managed to follow the action without even getting his own shadow in shot.

But, for Sunday’s Feyenoord v PSV match, Fox Sports wanted to take this shot even further. Henk van Meerkerk, Fox Sports Netherlands’ Head of Production asked his team: “‘Is there a way to impress again, can we make the feeling of being in the game even better?’ My main director came up with the idea to extend the shot by creating an earlier start. His crazy idea was jumping out of a plane and fly into the stadium while the players are entering the pitch. I loved the idea and we started working to get this done,” he said.

Besides working with De Graaf, they also brought in Broadcast Rental, who look after Fox Sports’ wireless connections and “are also very creative in finding solutions for all kind of broadcast problems,” said van Meerkerk.

“For the parachute jump to work, Broadcast Rental needed to build a camera rig that would be stabilised in the air, as well as on the ground, and would be able to withstand the free fall, shock when opening the parachute and eventually the landing. We custom built a rig with two Kenyon Gyro Stabilizers that would do the job.”

When they did the test jump, it was the first time that De Graaf had jumped out of a plane, “so he was a bit tense,” but it did allow them to see when the angle looked right to cut to, which was about 30-45 seconds before he landed. For the game, he jumped out of a helicopter, “because it’s much easier to do the timing,” said van Meerkerk.

Previously, for the Feyenoord v Ajax shot, they used a transmitter in a backpack, but the jump used a much smaller Cobham Solo7 Nano COFDM transmitter mounted on the camera rig, “so our cameraman doesn’t have to wear a backpack anymore.” The parachute jump started at about 2km height, which meant a re-think to how they received the signals on the ground.

“A special tripod with a pan-tilt rig was created to support two helix antennas as well as two additional 80º antennas. The antennas were placed on the roof of the Feyenoord stadium where an RF technician manually followed the helicopter and the tandem parachute, constantly keeping his eye on the quality of reception. Once inside the stadium, additional antennas on the ground picked up the signal and the cameraman was able to walk across the pitch, without any loss of signal along the way.”

Van Meerkerk wanted to surprise the viewers, by giving them the idea that they were initially looking at a standard helicopter shot, then show the players in the tunnel, returning to the parachute shot as it entered the stadium, landing on the ground, where he slid along and was released by the parachutist, to keep the shot moving.

De Graaf wasn’t supposed to land near the tunnel, so there was also a huge flag, surrounded by children, in the centre circle, for him to walk past towards the players.

Although the weather was good enough to allow the jump, it was rather windy, which meant the shot never looked stable enough to be mistaken for a helicopter shot. It still looked spectacular, as the cameraman swung through various Dutch angles on the way down, then landing with the chute blown into shot.

“We were happy with the broadcast. It can always be better. The whole idea of making it look like a helicopter shot to start with didn’t happen. It was too windy, so the parachutist struggled to get it steady,” said van Meerkerk.

It meant he entered the stadium away from where they’d planned (close to the tunnel), “but it got a great reaction from viewers, on Twitter — so we’re still happy,” and they have posted the shot online, along with a making-of video. The shot garnered so much interest that the director, Job Robbers, and the cameraman were also guests on a high-rated RTL show this week to talk about it.

“Technically, everything worked perfectly. When the helicopter was up in the air, they could also hear the OB director, and had clear video and intercom communication,” added van Meerkerk. When they did the test jumps, the rig only had one gyro stabiliser, but on the day they used two. “The rig would be heavier, but we thought it would be more stable.”

Although they currently have no plans to repeat the shot, he feels it could be done better, “but it needs perfect weather and wind from the right direction, and there is a limitation on which stadiums we can do it in [not in Amsterdam],” he said.

Window on the stadium

Sky Sports has used ChyronHego’s VistaCam system for its Monday Night Football show, with a wide stadium shot covering behind the presenters. However, Fox Sports has tried to take it further by creating the look of being in a box at the stadium rather than in the studio. It uses a projection system to look like a window over the arena. “I want to be in every stadium for the game, in an ideal world, so we asked: ‘Why don’t we create our own studio in every stadium?’, and this allows us to put a live feed behind the presenters,” explained van Meerkerk. 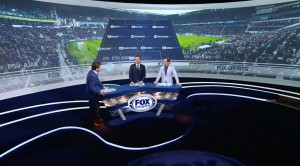 The ChyronHego VistaCam system offers a window on the stadium from the studio, as seen at a PSV v Ajax match

Initially they used a straightforward camera feed on a single fibre, but once they heard about VistaCam they felt it would look more realistic, although as it contains three HD cameras it requires three fibres. The VistaView software then stitches the three cameras together into a panorama. “The software remote controls the cameras in the stadium to not only tweak the camera’s paint, but also tilt, zoom and shift the panoramic picture the system outputs,” he said. For further realism, they used semi-transparent Fox Sports logos on the feed, to make it look like they had stuck the logos on the window. The system has now been used on three matches, including at Feyenoord. “We are using live footage, so if players come on to do their warm up, we see them in the background,” he added. “Our footage will be shown at NAB by ChyronHego, because it’s the first time VistaCam is used in this spectacular way. “

The ChyronHego Tracab real-time player tracking system also uses the VistaCam cameras, but although Fox Sports does use Tracab at two matches each weekend (not a fixed set up, unlike in the English Premiership and German Bundeslega, where they are in place in each stadium), this wasn’t suitable for what he wanted to do as it looks down at the pitch from high in the stand, and to get a realistic effect, the VistaCam cameras had to be at the same angle as the studio cameras, looking out over the stadium. “If you have a tilt down, it looks weird.”

The VistaCam system Fox Sports is using this season is being brought from stadium to stadium, but it is looking into the possibility of installing three permanent fixtures. “However, it’s quite expensive, and the Netherlands is a small market. It’s all about costs, and whether it helps us to entertain our subscribers,” he said.

While Sky Sports “has player tracking all around the stadium, combined with live moving graphics in real time, because the player tracking is there, we don’t,” said van Meerkerk. For something that would only be used a couple of times a match, it would be too expensive. “We were looking for a cheaper option, and think that Epsio Paint [which was developed by EVS with ChyronHego] could be it.”

It is “a really useful tool,” that can zoom in, add player names, draw arrows, circles and spotlights, and can be fitted in as part of a normal LSM operator’s job rather than needing a dedicated operator, and there is no need for extra outputs from the server. “They need a couple of seconds to prepare it. It’s never going to be your first replay — maybe your third,” he explained, and it means “we don’t have to wait to be in the studio to add some graphics to the replays.”

“We’re still working with EVS to develop it”, and it has had several software upgrades during the time Fox Sports has been trialling it, becoming faster and more usable. “It’s getting better every match,” and “we’re thinking about using it next season more often,” he added.