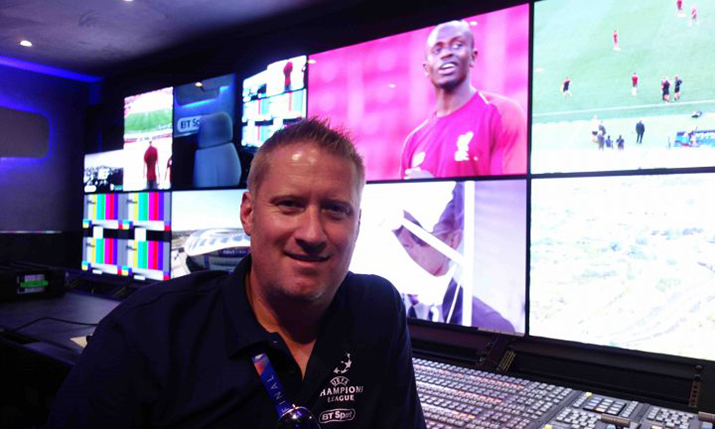 BT Sport chief engineer Andy Beale has been named 2021 Technology Leader of the Year by the IABM.

The SVG Europe advisory board member, who helped launch BT Sport back in 2013, was bestowed with the award for both his devotion to technology innovation and excellence and for his determination to make sports broadcasting more sustainable and diverse.

BT Sport was also recognised with the award for Most Inclusive Company.

Technology Leader of the Year recognises a person who is at the forefront of disruption and innovation within the broadcast and media industry who, through inspired leadership, has helped to deliver ground-breaking technology and business benefits.

Beale has been pivotal in moves to 4k, Dolby Atmos, AR, 360, and 8k and, during the last year, has taken the lead in transforming how BT Sport and the industry has transitioned to live remote production. His key focus is using technology for good and his priorities have been driven by staff welfare and safety, well-being, accessibility, sustainability and enhancing creative options.

“Technically Andy is a very creative thinker but one who always works to a core principle making him a fantastic role model, who has really shone over the last 12 months.”

The judges said: “His focus on adaptability has been key in ensuring technology is the enabler and not the driver. He has led on BT Sport completely transitioning its operating model to hybrid home, studio site working and he never stands still, as demonstrated with the new cloud production workflows being implemented for BT Sport’s Ashes programming. Andy engages enthusiastically with the wider industry in developing processes and sharing learnings for the better of people who work in the industry and his particular leadership on sustainability and accessibility has been incredible.

“Andy’s passion for the industry and ensuring it is sustainable long term by becoming more inclusive and diverse is equally impressive as demonstrated by the leadership role he has taken on in establishing and implementing the industry-wide Rise Up initiative and also the award-winning BT Sport United portfolio. Technically Andy is a very creative thinker but one who always works to a core principle making him a fantastic role model, who has really shone over the last 12 months.”

BT Sport was honoured for the action it has taken to promote Diversity and Inclusion. The judges noted its all-female Premier League match production, its work with Rise Up and the effort it went to on International Women’s Day and Black History Month.

IABM announced the winners of the 2021 BaM Awards and the Annual IABM Awards at a virtual event on 9 December.

The BaM Award winners are chosen from nine individual categories described by the BaM Content Chain, as well as a tenth category recognising an outstanding project or collaboration. The judging was carried out by a panel of more than 40 independent, expert judges, each with specialist expertise in one or more of the awards categories.

The Annual Award winners were chosen from entries across a total of five categories: Andrew Jones Young Person of the Year; Technology Leader of the Year; and the Broadcast/Media Company of the Year – augmented with two new awards for this year: Environmental Sustainability; and Most Inclusive Company.

The BaM Awards winners include EVS, Mo-Sys, Vizrt and Blackbird.

For the full list of IABM Awards winners visit: https://www.svgeurope.org/blog/headlines/iabm-reveals-winners-of-2021-bam-awards-and-annual-iabm-awards/