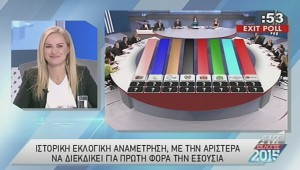 “In less than a week, we had to create augmented reality graphics for the most demanding and important elections of Greece. It was very challenging,” said Drimilis Ioannis, Creative Services Director, Antenna Media Group. “The amount of graphics and the complexity of their usage in real-time, made the challenge even bigger. We didn’t have the right technical equipment to support the project and turned to Orad.”

Ioannis said, “The only technical solution able to support this project was Orad’s HDVG+ with 3DPlay. Even when we got the equipment I thought that we couldn’t complete the entire project in the 3-4 days timeframe, but with 3DPlay we managed to create our actions so fast that we had more than enough time to create even more. The elections show was the best we ever had and our on-air graphics look, in my opinion, was the best among the competition.”