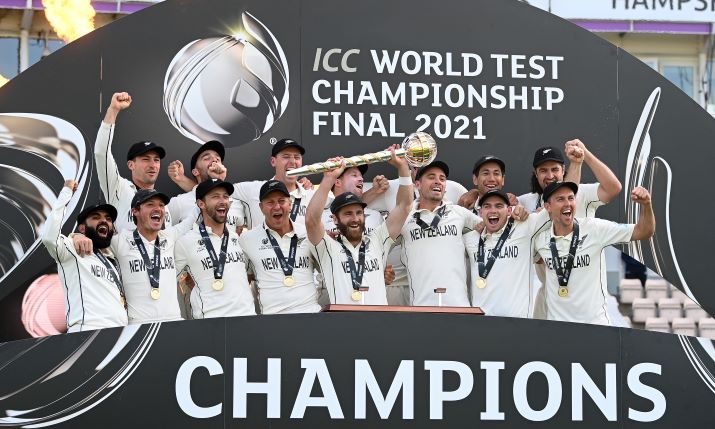 Sunset+Vine has assisted the International Cricket Council (ICC) with providing host broadcast services for the inaugural ICC World Test Championship Final 2021, which took place from 18 to 23 June when India and New Zealand met in a one-Test final at the Hampshire Bowl in Southampton, England.

The ICC World Test Championship Final, which New Zealand was crowned the winner of, is part of a range of events contracted to Sunset+Vine over a four year period as the ICC’s production services partner. Other events include the Men’s and Women’s Cricket World Cups, T20 World Cups and Under 19s World Cups.

The ICC World Test Championship Final has been a challenge for Sunset+Vine’s broadcast team of over 100 people who were required to stay and work in the bio-secure environment in Southampton, which the tournament participants also stayed in, in the lead up to the tournament. That team included a world-class commentary panel drawn from five Test-playing nations.

On what is the most innovative aspect of this production, Sunset+Vine head of cricket Huw Bevan told SVG Europe: “This was the first ever ICC World Test Championship Final, so of key importance for us was the positioning of the event in production terms alongside the other family of ICC events. The focus was on the heritage of the game, the attrition and challenge of playing cricket over six days and in presenting the match as ‘The Ultimate Test’.”

Sunset+Vine’s output included a World Feed service available to rights holders worldwide as well as an innovative English-language World Feed Programme conceived and delivered by ICC TV and Sunset+Vine’s editorial team, who have several years of cricket experience and storytelling expertise behind them.

As well as the live match coverage, the output included a 30 minute pre-game show, full lunch and teatime programmes and a post-game show. The Sunset+Vine content support included a special 60 minute Official Film post-event. The portfolio of programming built on the success of the host broadcast of the ICC Men’s Cricket World Cup in the summer of 2019.

Bevan commented: “Our focus was on several areas. The first was analysis and storytelling; the skills and key technical facets of the game, be they with bat, ball or in the field. This was produced from a dedicated analysis production area combining Hawkeye, a Piero Analysis system and a dedicated EVS operator.

“We also introduced new Field Plan and Player Tracking graphics to show real time how the field changed ball by ball, and with added features to show field dimensions and distances between players,” said Bevan. “And we crafted features and after effects edited packages showcasing, where possible, the Heroes of the Game and the compelling moments. These were integrated in our pre-game, lunch and post-game programmes and, where possible, in game between balls and overs. It was a seamless effort to integrate the editorial and tonality throughout each broadcast.”

The ICC TV production consisted of a total of 34 cameras including a drone, Buggycam and Spidercam. Umpiring and analysis for broadcast was provided through the integration of Hawk Eye as well as CricViz and Player Tracking.

As to how Sunset+Vine is moving forwards with the ICC on these productions over the course of its four-year contract, Bevan noted: “These constantly evolve in line with the ICC’s requirements for each event format and, of course, keeping in mind the evolution of technology. There is nothing specific to highlight at the current time but it will certainly include the development and integration of more in-depth analytics and data, enhanced player and ball tracking and use of micro cameras.”

Concluded Sunset+Vine chairman Jeff Foulser: “Cricket has been part of the fabric of Sunset+Vine for more than 20 years. We innovated with the coverage of the sport on Channel 4 in the UK when we helped to introduce Hawk Eye, and we have developed our coverage to the point where many of the world’s broadcasters now take our ready-to-air coverage and put it straight to air which is exciting at moments like the Super Over of 2019 when England won a thrilling World Cup.”