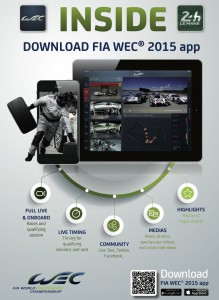 After one year of development in 2012 and then two years of real world usage, the app for the World Endurance Championship (WEC) can be declared to be a great success among motorsports fans.

Gérard Neveu, general manager of the WEC, began by explaining that “right from the start of the World Endurance Championship, we set about thinking how we could reach out not only to connoisseurs, but also to a wider public thanks to new technologies that were becoming available.”

With 6-hour race formats and the renowned 24 hours of Le Mans as well as a mix of four car categories and relatively complex strategic choices, the app became an obvious addition to round out the more basic TV broadcasts.

He continued: “In order to design the app we set up a working group that consisted of filming crews from AMP VISUAL TV, our editorial management, members of Netco Sports (the app developer) and WEC masterminds.”

For each race, 80% of the app content is free of charge (ie. standings, lap times, drivers at the wheel). For those who would like more they can opt for a small charge of less than five euros per race or 30 euros for the whole championship and receive live video streaming of the international feed, access to all the onboard cameras, as well as a large number of topics covered during the races themselves such as racing highlights, information about the drivers and so on, adding up to almost 150 features over the course of the race weekend. To date, 400,000 downloads of the app have been registered.

Guillaume Allais, digital sales manager for AMP VISUAL TV, explains: “International feeds, onboard camera feeds and VOD topics for all the 6-hour races are received directly via satellite at our media centre situated in Paris at the studio 107.” For each section of the circuit a LSM operator and two journalists (English and French) present news items that are broadcast directly from the OB production unit.

“We chose the EVS C-Cast solution as it is easy to use, and very rapid for encoding and delivering VOD. Also, in order to offer a variety of videos from all over the world, in the shortest time possible (less than five minutes after an event occurs during a race, for example) we benefit from the worldwide coverage of Akamai servers delivering live and on-demand content,” added Allais.

Note that for the 24 Hours of Le Mans race, everything is managed on site in the technical hub. A 150Mbps network is used to run the application. Meanwhile, during the main race, the app takes on the 24 Hours race colours and increases the number of onboard cameras from 10 to 15.

It is a good bet that considering the number of car manufacturers likely to battle it out, the race promises to be thrilling and the WEC app should once again prove especially successful.