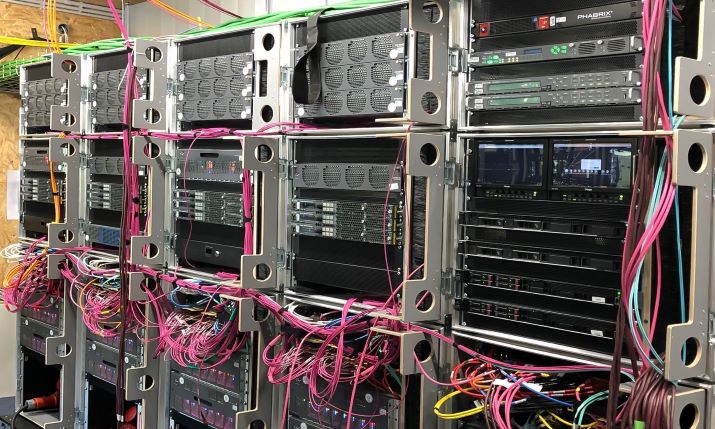 The new racks for ARD and ZDF at the National Broadcast Centre (NBC) in Mainz, Germany

German broadcasters ARD and ZDF have upgraded their technical subsidiary shared by both companies, Mobile Produktions Einheit (MPE), which translates to Mobile Production Unit, to full IP for production of Euro 2020 and Olympics 2021.

With help from German systems architect, Logic, the migration to IP has been used for all core components of MPE. ARD and ZDF decided to convert MPE to a completely IP-based infrastructure with five newly designed flight case racks at its core as part of a joint investment initiative.

The enhanced system offers more flexibility and scalability for the broadcasters, so operations can be expanded and temporary rental equipment can be integrated quickly as necessary.

MPE is used jointly by ZDF and ARD for events which, due to their size and complexity, cannot be handled with conventional production means such as OB vans or on-site studios, such as World Cup football matches and the Olympic Games.

The new system was used first at Euro 2020 and will also be used for the Tokyo Olympics later this month. In both cases, additional EVS servers have been integrated into the workflow easily. For Euro 2020, it is providing the production infrastructure at the National Broadcast Centre (NBC) in Mainz, Germany, which is ZDF’s headquarters, after receiving signals from the IBC located near Amsterdam.

MPE’s new racks are equipped with different components, depending on the application. During the configuration for Euro 2020, Logic implemented components from its partners and third party devices.

The IP-based infrastructure ensures that the various components work seamlessly with each other, so that the interfaces to the hardware are designed flexibly, and so conversion and signal transport function flawlessly and that the system can grow flexibly at any time.

The switches installed in the system are also ready for all eventualities, with 10 Mellanox SN3700c and two eMerge switches to deliver a throughput of up to 12.8TBps. The MPE units can handle approximately 800 SDI to IP and 800 IP to SDI signals. A higher level broadcast controller manages the whole system. Nevion’s VideoIPath is used as an SDN orchestration layer, providing a control layer for the broadcast controller between the end devices and the network.

ZDF and ARD are receiving their signals from the IBC without using a large production team on site at the Euros. The signals go in parallel from Amsterdam to Mainz to the NBC and Cologne to the ARD sports campus. The Amsterdam, Mainz and Cologne sites are connected with a 10 Gbps fibre ring line. The MPE racks are set up on the Lerchenberg in Mainz. They provide the SMPTE 2110 production infrastructure for both the 2020 European Championships and the 2021 Summer Olympic and Paralympic Games, produced jointly with NDR at the NBC in Mainz.