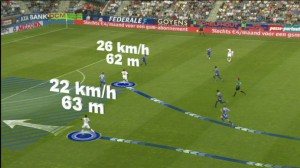 Impire, a German provider of football statistics and data, is using Deltacast Highlight to enhance Euro 12 coverage for its clients.

Graphics are a crucial part of any TV production of a major sporting event and coverage of Euro 2012 is seeing it used extensively for analysing the action as well as stats and general captions. UEFA contracted Deltatre media to supply systems for the host broadcast feeds but many broadcasters are customising this to meet their own presentation styles.

Independent media services company Impire is working with German regional broadcasters ARD and ZDF and Swiss broadcaster SF Schweizer Fernsehen, supplying graphics, live data and statistical highlights for commentators and editorial preview packages that include background information about teams and players.
ARD and Impire are running the graphics operation for Euro 2012 at the headquarters of another German regional broadcast organisation, WDR, which is based in Cologne. At the core of this is the Deltacast delta-highlight, an analysis system that includes the ability to track players.
Impire’s Sales Director, Mario Hanus, explains that the company has been using delta-highlight on ARD Sportschau, the broadcaster’s weekly Bundesliga football highlights programme, for the last two years. “We have done an upgrade with newly implemented features for Euro 2012 in order to provide a high quality solution for pre or post-match analysis,” he says.
The system is being used during matches to highlight specific players, trace their movements, show the distance of the ball from the goal prior to free kicks, and magnifying areas of play to show what actually happened in an incident. “The generated analysis video files are being used during the studio sequences when the anchorman is discussing the match with the expert, either before the match starts, with files from the last matches, or at half time or post match using material from the current game,” Hanus says.
In addition to delta-highlight, Impire is providing graphics in the studio sequences of the ARD programme, stats on players and teams, data feeds for the online coverage and live data as well as background for the commentary team. Among Impire staff working for ARD are a commentary assisatant to compile information and an editorial assistant to feed the presenters with statistical information.
Impire is also providing this production support service, minus delta-highlight, to SF Schweizer Fernsehen and WDR, which is also using the company’s full online and mobile ticker applications.
Other broadcasters using Deltacast touch screen-based technology during Euro 2012 are RTBF from Belgium and Chinese state service BTV.