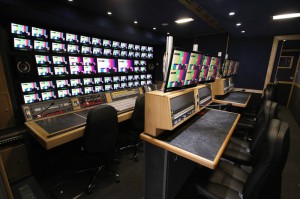 Arena OB14 continues to be in use for Euro 12, working for a UK broadcaster.

The coverage of Euro 12 has involved a number of entities, and not just the broadcasters and UEFA. During the group stages eight OB units have been operating at the four venues in Poland and the four in Ukraine as multilateral facilities, with another eight supplying feeds to the big FANtertainment video screens in the stadia as well as unilateral broadcasters. Many of the leading European OB companies have contributed these vehicles, including Alfacam, Euromedia France, St Berlin, Mediatec and two UK firms, Telegenic and Arena Television.

During the group phase Arena’s OB14 unit was stationed in Ukraine’s second largest city, Kharkiv, which is in the northwest of the country. The 17.5m long articulated truck, equipped with a four-bank Sony MVS-8000G vision mixer and 56-fader Lawo MC2 66 audio desk, was contracted to UEFA at that stage for screen and unilateral feeds, with the latter including pre and post-match interviews and studio coverage.

Now that the tournament is entering the latter stages the truck is being used for presentation work by a leading UK terrestrial and Freesat broadcaster, which cannot be named due to a non-disclosure agreement.

In addition to the standard match cameras for each game there is a large amount of specialised kit, including unit supplied by UK manufacturer Camera Corps. Among these are ten Q-Ball ultra-compact HD pan-tilt-zoom cameras. Each venue is also using two Hitachi DK-H32 cameras on VHR heads covering the goal lines, plus another DK-H32 with a wide angle lens at the back of the nets. A similar set-up is being use for wide shots of the venues, while scenic views are captured using Hitachi DK-H100s mounted on Camera Corps’ new Type 2B waterproof heads.

Q-Ball units are being used for the quarter-finals, semis and the final. These sit on the grass behind each goal on a magnetic breakaway mount and are controlled over a CCL Universal RCP and joystick in the TV compound.
Shots from handheld cameras and those mounted on helicopters are connected back to the main facilities over RF links provided by Riedel Communications. Spiderscams are also part of the overall coverage. Many stadia in each country have their own Spidercam and those that did not have had one installed for Euro 2012. Temporary broadcast cable infrastructures have been fitted at the venues by Gearhouse Broadcast, which also built and installed the TOCs.
Arena TV unit manager Chris Ryan comments that all the stadia being used had a “makeover” for the Euros and although Kharkiv stadium was “probably the most basic” it still had “a lot of facilities”. OB14 will be in the Ukrainian capital, Kiev, on 24 June and 1 July and in between that in Donetsk on 27 June.