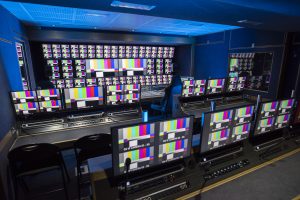 Arena Television has extended its reliance on Lawo broadcast technology

With vsmSOUL, VSM introduces IP orchestration alongside traditional control functionality, such as vsmTally in a single, fully integrated solution.

“With the purchase of SMART, Arena Television now have a unique capability to extensively monitor and control our equipment while realising significant operational benefits,” said Dafydd Rees, deputy director of operations at Arena Television. “One of the challenges that we intend to solve using SMART is offering operators an ability to easily monitor IP media streams across the IP network. It will plug the gap between traditional, well understood, video and audio monitoring tools and network switch monitoring, coalescing the two in a simple dashboard and providing unique insight into the media streams as they pass through the network. It will also allow engineers to proactively detect and diagnoses faults before they occur thereby further increasing the quality of the service that we provide to our customers.”

Arena will demonstrate the truck, with SMART installed and working, at IBC later this week, on stand 9.A02