Joining the SVG Europe association as OB/SI Sponsor is Arena Television, one of the UK’s major OB providers. 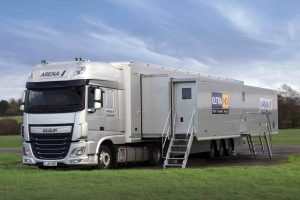 “Sponsorship of SVG Europe connects Arena with the key players in the industry as Arena starts to offer its services more widely within Europe,” commented Peter Love, head of operations.

“We have a strong focus on coverage of international football and rugby which sits well with the opportunities that SVG Europe provides.”

As an SVG Europe sponsor, Arena is able to more easily showcase its outside broadcast fleet of over 24 units, which include UHD/HD HDR/SDR multicast technology. This IP backbone is well placed to exploit future technology developments such as 8K and remote production, Love commented.

Arena celebrates its 30 anniversary in 2019. It notably works across a range of international sports.