The client that commissioned the latest OB van from Italian company Aret Video & Audio Engineering is called Qatar Cultural and Heritage Events Centre. At the time of writing the new nine-metre long vehicle is ready for delivery, does not yet have a ‘stage name’, and is also awaiting external graphic customisation.

This vehicle comes from an Italian company that officially boasts the creation of over 450 vehicles for TV production, but also radio-TV studios, SNG vans, automation, galleries, master control rooms and more in the broadcast sector.

The Qatari client, in addition to various tourist, cultural and media activities, also manages a culture-based television channel and aims to expand into the filming of sporting events. 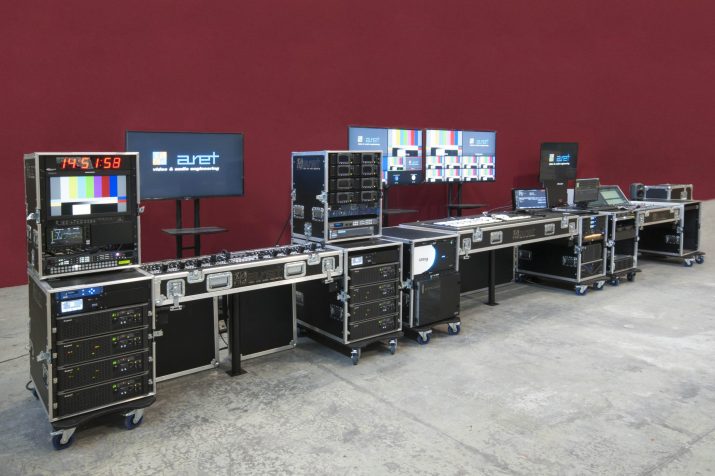 For Qatar National Day and the Doha international book fair, most of the on-board equipment of the new vehicle was temporarily collected in special flight cases and shipped to Qatar

Given the coincidence of two important national events and celebrations, the Qatar National Day and the Doha international book fair, most of the on-board equipment of the new mobile vehicle was temporarily collected in special flight cases and shipped to Qatar where it was deployed at various production sites — for as many as six hours a day of transmission over a two-week period — with a reduced format compared to the finalised one on the mobile vehicle, but complete and at full capacity.

“We are very proud of the result,” said Umberto Asti, vice president of Aret. “This project is one of the first (if not the first) fully 12G UHD OB van in the Gulf region, and its workflow is proof that you can build a cost-efficient 4K OB van using 12G-SDI, with no compromises on the quality side and with a great workflow. This is thanks to our technology partners like Ikegami, Ross and Lawo which represent today the state of the art technology in broadcasting.”

Under the technical supervision of Asti and with the collaboration of a team of engineers including Alessandro Costantino and Raffaele Farinaro, the vehicle boasts several patents, the possibility of future updates and a particular usability suitable for the difficult territories to which it is intended. Various special coatings and insulations have been applied which allow a long-lasting product capable of operating in any circumstance.

All stages of construction, design, equipment selection, engineering and systems engineering have been carried out within the company, as well as custom bodywork by the Aret Coachworx section.

“An automatic remote control stabilisation system and a mechanical movement logic system are flanked by a User Interface Software Dashboard from which to set all the on-board control and configuration systems via presets and adapt everything to future developments. The central server with the entire workflow management software is controlled by intelligent Ultritouch touch panels.”

The workflow of the UHD signals in 12G-SDI is based on Ross Video solutions: Ultrix hybrid router, Xpression Studio character generator for real-time graphics and an Abekas Tria server that manages monitors in real time and multiple resolutions, including Ultra HD-4K, HD and SD.

System redundancy and backup are guaranteed, as are multiviewers for controlling audio and video signals and Ross OpenGear glue. The truck features Lawo mc236 audio mixer and AES analogue connectivity, direct via MADI with the Ultrix video router, and via RAVENNA fibre to two compact I/O stageboxes by Lawo for long distance productions.

The cameras chosen are all by Ikegami, eight UHK-430 and two HDK-99, native in 4K. The UHK-430 provides simultaneous HDR/SDR processing and mounts a 2/3” CMOS sensor that produces images at full 3840 x 2160 UHD resolution and optimal depth of field outdoors.

The camera, which weighs only 4.6 kg and is easy to use on shoulder, on tripod and studio pedestal, provides B4 bayonet mounting compatible with all 2/3” lenses and an optional SE-U430 expander that allows the use of studio lenses.

Ikegami also provides an optional Media over IP module for CCU-430 that allows the exchange of 4K UHD video feeds and additional signals, such as intercom and video return, between CCU-430 and a local IP network hub on a light optical fibre, without using multiple SDI cables: signal distribution becomes simpler and latency is minimal.

The Ikegami HDK-99 cameras are suitable for portable and studio use and mount three 2.6-megapixel 2/3” CMOS sensors for high quality HDR images at 1920 x 1080 resolution in progressive scan.

Here too the AXII processor is integrated and the lens aberration correction function of the lenses minimizes the resolution and colour losses at the edges. A fast focus function EZ Focus Assist improves vision in the viewfinder so that the operator can make more precise focus adjustments.