This week the Olympic flame begins its journey to the 2018 Winter Olympics in PyeongChang, South Korea and the Olympic Channel offered up live coverage of the lighting of the flame in Olympia, Greece on 24 October. It’s all part of an Olympic Channel effort to promote the 2018 Games that will eventually include having a team of upwards of 50 people on site during the Games to create a wealth of content for use during the Games and beyond.
“We will be doing ‘outside the fence’ stories in and, in partnership with the rights holding broadcasters, assisting with getting people to go to their platforms,” says Mark Parkman, general manager for the Olympic Channel. “We will also produce a lot of content for post-game usage.” 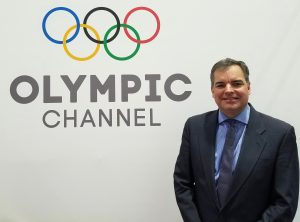 Mark Parkman, Olympic Channel, GM, says that the channel is exceeding its goals for year one.

The presence at the 2018 Games proves how far The Olympic Channel has come since its launch following the closing ceremony of the 2016 Summer Olympics in Rio.

“After our launch we went from a sprint mode to marathon mode as we have a digital project that is never standing still,” says Jochen Färber, Olympic Channel, chief of Lausanne office. “We move forward and adjust.”

Frederico de Mojana, Olympic Channel, head of programming, says that the programming goal between now and the start of the Winter Olympics is to lead people to PyeongChang. Helping in those efforts is the use of Google analytics which allow for in-depth analysis of what content works, what doesn’t, and how long viewers stay engaged.

“We know when people drop out when they are watching a game or that if they drop out of a piece we need to make it shorter,” he adds.

Parkman says the Olympic Channel passed cumulative video views of one billion on social and its own owned-and-operated platform.

“We have created more than 7,000 pieces of content over the past 21 months,” says Parkman. “We also have agreements with 57 international federations as we are open to all recognized federations and by the end of the year we will have done 500 live events which is one of the things we’ve stressed with the federations.”

The goal, says Parkman, is to not interrupt any existing distribution deals a federation might have but rather to amplify it and expand it to a global scale with live streaming of events, social promotion, and original content creation focusing on the athletes and sports.

“We help them take a closer look at how to produce content around their sports and grow outside their niche audiences,” he adds.

Helping in those efforts has been an expansion from offering content in only one language, English, to 11. That allows for the Olympic Channel Web site and app to have much more relevance to Olympic sports fans around the globle.

“We are achieving a lot of our goals to provide 365 days of engagement a year with Olympic sports,” says Parkman.

Three key milestones for the Olympic Channel have involved linear TV carriage. First, a deal with NBC Sports led to the launch of a 24-hour Olympic Channel in the U.S. Then in August Eurosport began carrying blocks of Olympic Channel content. And on 1 November a second 24-hour linear channel will be launched with BeIN in the MENA region. That channel will also carry live coverage of Olympic events from PyeongChang.

“It’s a great way to kick off the Olympic Channel brand in MENA,” adds Parkman. “What NBC and BeIN have done shows their faith and confidence in their investment in the five rings. It is proof that they are full invested in the Olympic movement.”

As of 1 November the Olympic Games will be 100 days away and the Olympic Channel will begin a countdown to those games with 100 pieces of content designed to promote the games.

“The content will range from guides to the sports to athlete profiles and high-end documentaries,” says Parkman. Five documentaries will be produced by Frank Marshall (producer of films like Jurassic Park) and will have a look and feel that is in line with ESPN’s “30 for 30” series.

“Our next evolution is to provide services so we are not just a platform but giving our stakeholders and partners more access to our footage and content via the video player,” says Parkman. “It’s a huge win for their digital platforms.”

Another service offered by Olympic Channel is archiving services as many federations either don’t have archiving systems or simply keep videotapes and other media in a basement.

“We offer a service where they can digitise material at less-than-competitive rates and some have also asked us to do clipping services or provide commentary,” adds Parkman. “The World Games [this past summer in Poland] were a perfect example as all the signals came to Madrid for commentary and then the 24/7 World Games channel was returned to Poland and the rights holders. So, our facilities and infrastructure can offer federations things that enhance their digital offerings.”

One of those offerings is helping federations drive social engagement. And with the Winter Games coming up in South Korea the Olympic Channel team has created localized initiatives in Korean with local productions and also extending content in Korean to social platforms.

“We want to take social viewers that are interested in content and have them come back to the Olympic Channel platform,” adds Färber.