Assessing the impact of live streaming on sports with BT Sport, the FA and Grabyo

The Streaming Forum at last week’s BVE London show in ExCEL examined the emergence of new formats that maximise the value of rights and provide new digital experiences for audiences, particularly with live platforms.

“There are new distribution models emerging across OTT and digital platforms. We’re seeing a significant increase in the growth of mobile video in particular,” according to Gareth Capon, CEO, Grabyo, which provides tools for rights holders or content owners that help with live streaming, editing and distribution of digital content. 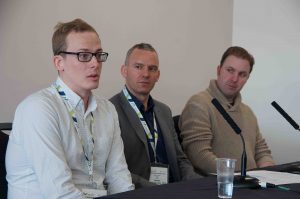 BT Sport’s Nick Pearce, with Grabyo’s CEO Gareth Capon and Damien Cullen of the FA, speaking at the Streaming Forum

The potential for online to disrupt the market is being seen in the large number of new players, such as Amazon, which has bid for or obtained rights for the Premier League, NFL and UK tennis; and Facebook going for surfing, soccer and IPL cricket (losing out on the later despite a $600m bid).

“Non-traditional distributors of content are willing to make significant investment in sports properties, predominantly around live streaming, but it covers a whole range of other sports content as well,” Capon told delegates at the Streaming Forum.

BT Sport, which entered the market in 2013, has rights to the Champion’s League, Europa League, Premier League, Moto GP and rugby, and has moved from a basic digital presence (web site, apps) to engaging more via social media. “We’ve done a lot of exciting things on those platforms,” said Nick Pearce, Digital Production Lead, BT Sport.

Besides its traditional simulcast channels, available on iOS and Android apps and the desktop, which has been going since day one, its digital team is also now producing some of its own content. For example, last month when it renewed its Moto GP rights and streamed the announcement live on social media.

Fishing where the fish are

Rather than trying to communicate with everyone, the UK’s Football Association has focused on identifying who it needs to target, and addressing them via social channels, offering content around its women’s league and international teams in particular.

The FA doesn’t usually have rights to streaming games, but it does work with broadcasters to allow it put complimentary content online, such as live clipping a game. However, it does have rights to many of the women’s games, and is now looking to create “a hub for women’s football. Not just to get viewing figures, but also to get data, to find out more about that audience: geographically and to find out what kind of people are watching live and VoD content,” explained Damien Cullen, Senior Video Manager, the FA.

He feels it is important to “go fishing where the fish are” so rather than trying to drive viewers to its website it goes out to them, via Facebook and Twitter, aiming to complement what the broadcasters are doing. It also wants to treat live as a more interactive experience.

BT Sport is also trying to engage more with viewers on Twitter, such as for its Saturday afternoon results show. When it got the go ahead to do this show two years ago it initially put it on Freeview, but this season it has streamed it live on Twitter (to UK audiences), as that is where the people who really love football are on a Saturday.

“It is adding on a huge chunk of the audience, because they are able to watch it while they are out and about,” said Pearce. There are no rights involved, as BT isn’t allowed to show any action. “We’re opening a window to our talent and to our other shows, which we can promote, and also it’s attractive for sponsors.” Its talent also love that they can tell people to follow them on Twitter.

“It’s not always about wide reach. Sometimes it’s about getting a smaller number of highly-engaged people,” agreed Cullen. For example, the FA will be doing live shows from inside the England World Cup team camp this Summer, to engage more with fans, “to tell a different story” from those that appear in the media.

It will also have live clip rights globally for the FA Cup from next year (currently it has an embargo), which it is looking to put into a show, and it has extensive rights to the women’s game, which it will increasingly call on over the next two years, hoping to convert more women to playing the game. “We know we can do a live and get X amount of views or engagements,” but it needs to lead to more than that to grow the sport.

For BT Sport providing free content has to have a commercial imperative. Some of the sports bodies it gets the rights from want it to provide some free-access content. In the case of Cricket Australia, it was happy to have BT put that content on social media with no geo restrictions.

This winter, before the Australia vs England Ashes tests, it put out the warm-up matches on Facebook, which hadn’t been done before. “Previously these games have just been composed of clips on news channels, but we were able to use those games to spread the word that we were showing the Ashes,” which Pearce feels is a “really smart use”. BT is also putting games from Australia’s Big Bash league on YouTube. It ticks the free-to-air box “but it is also reaching a younger, maybe more engaged, audience than if a cricket game had just been put on free-to-air at 9am on a Sunday,” he added.

He is seeing rights holders actively pursue this. “For the last two seasons we’ve screened the UEFA Champion’s League and Europa League final for free on YouTube. And they see it as a great way for us ticking our free-to-air box.” It reaches a huge audience, and allowed BT Sport to innovate as well.

For 2017, from Cardiff, it did both UHD and VR. “Not every rights owner is like that, but we are seeing more and more now that they absolutely want stuff to be streamed on these social platforms, so it’s really exciting for us.”

One of the things that Grabyo is asked regularly is whether “certain demographic groups want to watch live. Are they going to sit in front of a sporting event or soccer game for 90 minutes? Are they more interested in gifs or short form or vertical videos on Snapchat?”

Cullen believes that second screen apps are useful for keeping engagement during an event, such as for the FA Cup final. Because the FA didn’t have rights to live stream the game, it did a Soccer Saturday approach, commenting on the game, with guests, which garnered a lot of interaction, adding to the debate around the match.

It is also working to make better use of the aspects of the game, such as in the tunnel or pitch-side, where it doesn’t need rights to enhance its online coverage and add to the debate after the game – allowing fans to get their questions answered, for example. He also hopes to do little Facebook Live segments with the England team as they travel and scheduled live coverage during tournaments.

BT is also using live content as promotion for its broadcast shows. “For Rugby Tonight, our live rugby magazine show, we simulcast part one on social media, and the audience that watches that is actually influencing that show because their live questions are being put to the guests,” said Pearce. “And if you like what you see, the other three parts [of the show] are available on our pay TV service.”

BT Sport also uses that model for other shows, such as Premier League Tonight, and allows fans have a conversation with the players and presenters (the show also takes in user-generated content, including match reports on video). “It has actually driven some really interesting discussions on the show,” he said. “There is a community element to a lot of what is happening around live, and that’s not just on Facebook, or YouTube or Periscope, it’s also on broadcast television,” as social media feeds into the production, added Capon.

The main challenges facing those outside the broadcast envelope are “keeping your costs down, but still keeping your standards high: lighting, sound and connectivity are probably the three biggest ones,” said Pearce.

Bandwidth is the main challenge for Cullen, but also “making it appropriate for the audience.” Sometimes you are better not having high-end cameras, because a low-budget look may give it “a more authentic feel.”

There is also a problem with latency, which can be 25 seconds behind the live broadcast, so reactions are always a little behind the play. He is working with Grabyo to allow more editing in the cloud to help reduce delay.

“There is always going to be this challenge of cost of production and the infrastructure you put behind it,” said Capon. “One thing we are seeing more broadly is that there is an increasing demand for the amount of content going out, particularly live content, but not the same increase in budgets to be able to do that.”