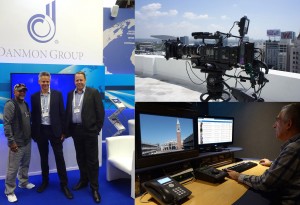 ATG Danmon, one of Europe’s leading broadcast systems integrators, has reported a successful year with sustained demand for its wide range of services. “Among the highlights of the past 12 months was being selected by Universal Music Group to design and build a five-camera UHD flyaway for deployment at Capitol Studios in Los Angeles,” says ATG Danmon managing director Russell Peirson-Hagger.

“This project is centred on UMG’s drive to open new opportunities for recording artists and songwriters through the development and production of film, TV, theatrical, live events and digital video. The system incorporates Sony PMW-F55 4K cameras with Grass Valley fibre optic links. One of the cameras mounts onto a Ross robotic pan and tilt head, the other four being configured for manual operation. The system is equipped to allow creation of 1080/24p high definition proxies from each camera chain, which are then used to make an edit decision list for post-shoot 4K conforming. Also included is audio processing for Dolby Atmos which is steadily being adopted by cinema owners around the world.”

A further project completed this year was for two multi-camera studios installed for an international investment management company. This included a complete new studio build in Hong Kong and the upgrade of an existing studio in the financial centre of London.

“The requirement was for a studio to provide thought leadership and investment expertise to national and international broadcasters as well create a variety of marketing and product related video to share with clients,” Russell Peirson-Hagger adds. “The system is a full augmented-reality studio including a Ross tracked virtual camera solution with robotic heads, graphics, vision mixer and auxiliary infrastructure. It was fully prefabricated and tested at our UK headquarters before being shipped for on-site installation and commissioning by ATG Danmon staff.”

Demand for software-based solutions continued to be strong. A quality-assurance and transcoding station was completed for a globally active news service. This is being used to ingest and process file-based news arriving from reporters around the world. ATG Danmon combined Vidcheck QC software with Dalet Amberfin transcoders and Tachyon frame-rate converters.

Following the recent completion of a quality-control system for one of Europe’s largest state broadcasters, ATG Danmon UK produced seven content transfer workstations for use at the network’s film and tape archive. Each workstation was housed in its own booth and equipped with Sony video tape decks plus a Steenbeck film editing machine. The VT and Steenbeck video feeds connect through a Blackmagic Intensity Shuttle to MagicSoft Recorder ingest software running on each workstation. The system can capture seven concurrent streams with far higher quality content transfer than the DVD media previously used. A large Dalet Amberfin ingest system was also supplied.