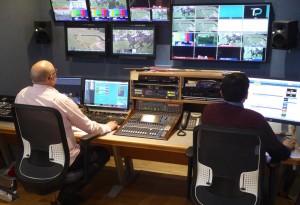 ATG Danmon has completed a gallery upgrade at the London headquarters of Input Media, one of Britain’s leading sports television production companies. Founded nearly 30 years ago, Input Media produces over 2,000 hours of high-quality programming every year.

“We partnered with ATG Danmon in 2015 for a major upgrade of our off-tube commentary facilities,” says Nick Symes, director of technology at Input Media. “Their team proved to be flexible, helpful and sympathetic to our needs, especially in the business world where the goalposts move during the project.

“The upgrade to one of our existing galleries was required to provide facilities to a new customer who is producing an integrated betting feed for delivery to the independent betting sector. The channel is being distributed via satellite to end customers in the UK and Ireland.

“As well as televising fixtures from UK racecourses, the channel is covering South African racing, including a wide range of turf and all-weather flat and jump racing. The service is on air 364 days of the year.

“Live content is sourced from up to nine incoming clean-feeds. The entire system was design to run in HD 1080i with conversion at the edges for distribution, ensuring capability for the move to full HD operation in the future.

“A key objective was to make the facility capable of being controlled by a single multi-skilled operator who can direct the service and produce an integrated feed of multiple sources and replays as defined by the customer’s daily racing schedule. We have incorporated a bespoke software control solution which integrates racing betting data, on air graphics and broadcast control. The operator also supervises audio commentaries which come from the race courses along with off-tube via a dedicated VO booth, also housed at our London HQ.

“Two Axon compliance recorders capture the output. The first phase of the project started in August and was completed at the beginning of September, handling feeds from South Africa. Phase 2 was to handle UK race tracks, and went live in January.”