The broadcast production and distribution arm of the ATP World Tour, ATP Media, carried out a live 4K HDR versus 1080p HDR test at the Nitto ATP Finals in November 2017 at The O2, London, with technology provider Gearhouse Broadcast. The test was designed to compare the two production formats in a live tennis environment side by side as part of ATP Media’s commitment to trialling the latest technologies to advance its offering, and it seems that 1080p HDR has come out on top.

Speaking to SVG Europe, Shane Warden, the director of broadcast & technology at ATP Media, revealed the purpose of these trials: “ATP Media is always looking to innovate and improve the experience of a tennis viewer, and with the arrival of UHD we see the opportunity for a significantly greater impact on the viewer from Wide Colour Gamut (WCG) and HDR in UHD, rather than just resolution.” 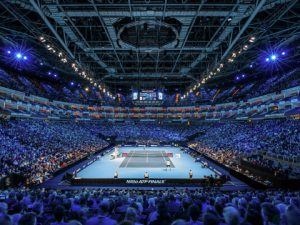 He continued: “These trials were designed to create a direct comparison of the two HDR formats (4k v 1080p) in a live tennis environment to discover what the apparent visual difference would be between the two resolutions. The additional aim was to use the tests as an educational tool to demonstrate HDR to commercial, production and executive teams and let them experience it first-hand.”

The ATP Media and Gearhouse team were able to combine the Sapphire HEVC system seamlessly with the main production, with all the outputs coming from one desk and one director’s cut. This allowed them to compare their existing 1080i output with 4K SDR, 4K HDR and 1080p HDR.

The result of the test showed that 1080p HDR appears to be the right route for ATP Media. On what made the format stand out so much, Warden explained: “A 1080p HDR comparison to 4K HDR demonstrated that for the realistic domestic home environment with an average size TV set (55 inch) there was little perceptible difference to the eye even though 4K has 4x the resolution.

“This is important to us in a global sport such as tennis as it means we could sooner and more easily bring the advantages of HDR to the viewer without carrying the payload of having to produce, edit, distribute and store in 4K,” Warden continued. “This is significant particularly for us at ATP as our coverage is not like a football or rugby match; we are on air with up to 11 concurrent courts for 14 hours a day for between seven to 14 days. If you multiply that content by four (to get 4k), you will appreciate the problem!”

On the challenges of working in 4K for tennis, Warden stated: “The challenges centre mainly on the fact that we are a global Tour with a considerable volume of content created at and distributed from each venue. At one level, until IP is widely available, we are forced to work in a cumbersome world of quad. I also believe to really appreciate the best of pure 4K, we need to view it on very large screens (65 inches plus): however for fast-moving sports, this raises the need for High Frame Rate (HFR) in order to reduce the effects of judder across the very large surface area of the viewing screen. HFR adds yet another multiple to the size of the content we need to distribute, edit and store!”

HDR and WCG can bring the solution to the long-standing problem faced by outdoor sports, stated Warden. He told SVG Europe: “Sunlight and shadows have always compromised the TV coverage as the camera chain has had to be limited by the historic limitations of the technology that brought moving pictures into our homes. For us in tennis where we play under the desert sun or the peak of the Mediterranean summer from morning through dusk and into a floodlit night, HDR liberates our coverage and brings fantastic, colourful life to the story we are telling on court. You might think there is not much to be gained from our indoor tournaments — but as the test at the O2 showed, there is a massive change in the viewer’s experience where the unlit crowd suddenly become much more visible and the theatrically lit court and LED boards really come to life.”

Rights holders are an integral part of how ATP Media will move forward on the back of this test. “We are currently in discussions with our broadcast licensees to understand their roadmaps for HDR. The response we have had has been positive and we are working closely with them to decide on our roll-out of 1080p HDR,” stated Warden.

He concluded with the next step for ATP Media: “We will be conducting an end to end production test of 1080p 50 HDR at one of our outdoor tournaments this summer in consultation with our broadcasters.”

The demonstration room at The O2 was also an opportunity for ATP Media to test Dolby Atmos and compare it to Dolby Digital 5.1. As a globally travelling OB with a big variety of Stadia, the test was designed to understand the challenges of producing in Atmos and to experiment with what a “Tennis Atmos Soundscape” could sound like.

Discussing the performance of the system, Gearhouse Broadcast France’s managing director, Mathieu Rocton said: “This is a real game-changer for us as we are now able to offer our clients world-class 4K productions including wireless video with low-latency UHD. We look forward to working closely with the team at Broadcast Wireless Systems in order to roll out this new technology into future productions.”